Skip to content
In Car Wars, you often want to drop your weapons.  Here are a few shots of the drop weapon templates for my next fight. 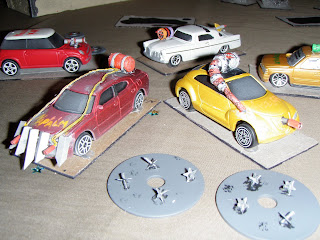 Here are two of ten spike counters.  These are simple star shaped confetti pieces with a short (2mm) length of cut wire run through a hole in their center to prop them up.  They are glued to a metal washer, primed in gray and then painted silver over black.  They don’t look half bad, but I have serious doubts about their ability to stand up to heavy use.

In the background, you can see a couple of oil slicks. The base is done, but I need to gloss them up to make them look really slick.  So no close-ups until that’s done.

I really like this side by side shot of the Napalm and Sizzler.  I’m hoping to maintain some sort of consistency with the weapon barrels to keep the game as WYSIWYG as possible.  You can see that the two cars in the foreground are both packing literal heat in the form of flamethrowers, not just by the external tanks, but also by the round barrels up front.  I know the external tanks look vulnerable, but would you really want to drive a car with that much incendiary material inside of it? 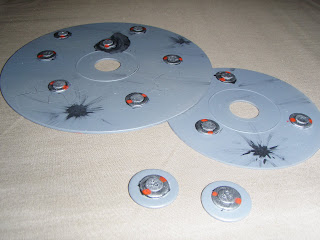 I’ve got enough land mines to fully load up a Killer Kart – even though I doubt the thing will last long enough to use them all. These are standard washers with a big of 3-hole punched cereal box carboard glued to the top. I punched a few holes in the top to serve as rivets and painted them with the red shape-charge stripe, when it should have been frag yellow.  Whoops.

The CDs in this picture are intended as an easy to place minefield.  Keeping things fresh in an arena is always a challenge, and this is a low-volume way to add one more variable to the mix.  The washers came in packs of 30, so this seemed a good use of the extra land mines.

Not pictured, smoke.  You can see a few of the 20 pieces in the previous post.  To make them, I carved rough spheres out of a gray foam packing material, drybrushed the tops black, and glued them to stiff cardboard.  They work great for checking line of sight, but they take up space in The Box all out of proportion to their utility.

Up next:  The Box in all it’s compact glory.