This post is brought to you by my son’s 13th birthday.  Everything I’m doing here, I’m doing in preparation for his party in which he and a party of friends will enter a dungeon…and they’ll do it old school.

The last decade or so has witnessed countless attempts by your humble author to build a sprawling mega-dungeon fit for an insane wizard or alien evil godling.  Every effort failed miserably because I was too caught up in numerous new-school problems.  What do these guys eat?  How do they get in and out?  What is the poltical relationship between these orcs and those rock apes?  How the heck am I going to fully detail and flesh out over a hundred rooms? 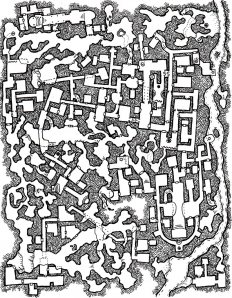 Specifically, the following wonderful full page map from Dyson’s Dodecahedron.  (He has lots of other pretty little things, you should visit his blog, too.)  Look at that thing, sprawling, interconnected, lots of fun little nooks and crannies, and enough chokepoints to carve it up into a bunch of separate mini-dungeons. Three times I’ve tried to fill it up and failed, but now I think I’ve finally figured out how to do it right.

My recent dive back into the old ways brought me into contact with some lovely blogs (links on your left) that helped me realize that I don’t need to answer those questions at all.  There’s one over-riding rule that I’d forgotten over the years:  It doesn’t have to make sense, it just has to be fun.

With that in mind, the seed for a campaign was planted.  What if the dungeon was really a physical expression of an ancient entity forcing its way into our reality?  Thus was born the idea of The DungeonGod.  That alone wasn’t enough.

It was Philotomy’s musings that poured water on that seed and really helped it germinate.  In that link he quotes the original rules on doors. To whit, the dungeon isn’t just the place where the monsters happen to live – the dungeon is itself a monster with a will of its own – a will set against that of the characters.   More to the point, it’s a place where the boundary between the fantasy world and the other (even more alien) fantasy world are thin.  The normal rules do not apply.

That also ties in well with another idea malingering about in my head, that monsters aren’t just another (all too often categorized as misunderstood) race.  They are monsters.  They are evil incarnate.  They don’t enter this world the way humans and dwarves and elves do.  They aren’t raised from birth by loving families and clans that have hopes and fears for them.

Monsters are malicious creatures of pure malice crawled forth from the belly of blackness to bring pain and misery into the world. They are literally spawned in pools of foul ichor, sprung forth whole from the mind of the DungeonGod complete with armor and implements of pain.  And in a terrible twist of genius, they spring forth laden with gold and other valuables – birthed by the DungeonGod to entice greedy men into entering its domain.

Men like the party of adventurers who now need no more motivation to enter a deathtrap than, “We know there’s monsters in there that need killing and lots of gold there for those willing to do it.”  If, along the way, they happen to stumble onto one of those pools and destroy it with holy oil and water and powerful magicks? So much the better.

And that’s how you justify not having to justify every little thing that happens in a dungeon.