Looking at my so-called city board, something about it always seemed off to me.  It wasn’t until this weekend, while cruising what I think of as the Infiniti terrain-porn* sites, that I realized what it was.  The board was too rural.  The earth and grass speaks more of suburbia than urbania.  What this calls for is some urban development.

That’s a really easy fix.  All you need is a new drop cloth, some spray paint, and you’re in business.  So check out the new and improved urban-core. 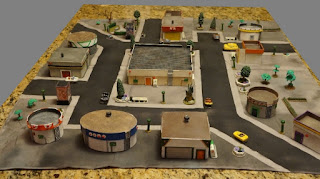 After a bit of planning on graph paper, what I did was mark out three inch wide roads using masking tape.  First I sprayed the roads black, then dusted the whole cloth in black and a light gray color.  I moved cardboard blocker boards around to give different parts of the board different shades of gray.  Then I gave it a last dusting with a pale blue color, to break up the monochrome a bit.  After I was satisfied with the concrete coloring, I just pulled the masking tape up.  Leaving the areas covered by the tape completely free of spray paint results in a brighter shade of concrete for the sidewalks.

That’s the stuff.  New roads, fire lanes blockable by traffic, and none that cross the whole table.  All we need now is a few flattish terrain pieces to fill in a few gaps.  Maybe a skate park or a junk lot.  Those sidewalks need some additional cracking, too.  It ain’t done, but that concrete jungle looks a lot more city-like to my eyes.

In retrospect, it might have been better to build those roads at a more oblique angle.  The Infiniti guys swear that it gives you shorter fire lanes from one table edge to the other.  I’m not so sure that matter given my play style.  Infinity explicitly uses table edges in a way that most of my games don’t.  For example – in my last Black Ops game, the defending force started in the corners.  This should work out just fine.

Meanwhile…it’s finally time to go back to Castle Meatgrinder!  We’ll revisit my fantasy tabletop next time.

* Some of those Infiniti forum dwellers have really got their act together when it comes to building cohesive city boards that are attractive and make sense as urban centers.  If you need terrain inspiration, check them out, but be ready to look at the clock and wonder where the last few hours went.