The pre-history of the Americas is a true dark age – a time of great uncertainty and filled with mysteries for which we may never have solutions.  The most basic of these, who was the first to arrive, remains shrouded in conflicting narratives and contradictory evidence provided by scattered and controversial archaeology sites. 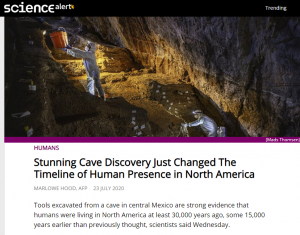 Tools excavated from a cave in central Mexico are strong evidence that humans were living in North America at least 30,000 years ago, some 15,000 years earlier than previously thought, scientists said Wednesday.​

We don’t know nearly as much as we think we do.

The initial impulse of an impish cad like myself is to point out that we don’t really know who the indigenous people of the Americas were.  It is well within the realm of possibilities that the original North Americas slunk across from Europe by way of island hopping through Iceland, Greenland, and Nova Scotia. Which would make the Asiatics who crossed the Bering Straits to settle the land colonizers and genocidal maniacs.  By the current political standards, they have no claim to the land and must give up their reservations as reparations for the harm their ancestors did to the indigenous peoples of this land.

Alternatively, and a bit more seriously, the linked article includes this interesting tidbit:

“[Why has] no archaeological site of equivalent age to Chiquihuite Cave has been recognised in the continental United States[?]  With a Bering Straits entry point, the earliest people expanding south must have passed through that area.”

The question assumes the Bering Straits Theory is the only one that holds water.  A rather sizable assumption given the dearth of evidence.  And the possible explanation lies in the stone-age sailing ship piloted by Thor Heyerdahl.

For those who don’t know, Thor was a stone-cold badass and scholarly adventurer who set out in 1947 to prove that Polynesia could have been settled by South Americans.  To prove it, he sailed across the Pacific in a tiny little raft built, steered, and maintained with only stone-age technology.  The only sop to modernity was a few pieces of clothing and a communication radio for emergencies.

He sailed east to west, but he also proved that a west to east crossing was possible.  Which would suggest that the earliest Americans were actually of Polynesian descent.

An ocean crossing would explain the dearth of archaeological sites along the Canadian Route.

And wouldn’t that be something?

For now, believe what you want to believe.  Science can’t prove much about the First American Dark Age. so you’re clear to live your own Truth on who got here the firstest with the mostest.