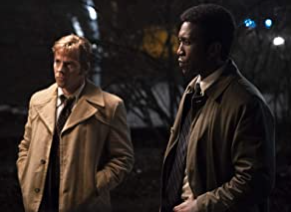 True Detective is an anthology series – a rarity in American television – and each of the three seasons produced…to date.  Everyone loves the first season, a gripping delve into weird sex cults and powerful pedophile rings down in the bayou.  Most people hate the second season, a look at the seedy side of big LA crime and government but I repeat myself.  With the third season Nick Pizzolatto offers up a look at darker side of life in one of the small towns that dot the Ozarks of mid-America.

For the record, I’m a fan of the much maligned second season.

Where the first season dove into serial killers, the second dealt with gangland killings and big city government corruption, this third season takes a much more limited approach.  Turning away from the centers of power, it dwells within the smaller political fights within tight-knit communities where murder and kidnapping and cover-ups are rarely seen and seldom heard.  It’s a nice change of pace, and while the stakes feel lower than in the first two seasons, this change of pace lends TD3 a more intimate feel than its predecessors.

As usual, the central whodunit serves as the connective tissue that pulls people together, but the show deals as much with the questions and struggles of the personal lives of the central characters as it does the questions and struggles of the crime at the core of the season.  In Season Three we meet Wayne “Purple” Hays, played with an understated intensity by Mahershala Ali, and his partner Roland West, played to perfection by Stephen Dorff.  Hays is the straight man, a quiet and contemplative warrior whose strength is undercut by deep doubts in his own place in the world.  West makes the perfect foil, a good old boy whose pragmatism is his biggest strength and greatest weakness.  They are friends from start to end, although the show plays bromance with the characters as much as it does the romance between Hays and his own wife.  That subplot, the meet-not-so-cute and boy-meets-finds-loses-and-finally-marries girl…

This third entry’s timeline cuts back and forth between the initial investigation, which ends on a dubious note as all True Detective investigations do, and then a second look at the crime years down the road when new information becomes available.  An old familiar feeling for fans of the first season, but here Pizzolatto adds a new wrinkle in the form of a third time-frame that takes place forty years after the initial crime.  The gears of Hays’ mind are starting to slip, and his forgetfulness means that he is as much a spectator to the early timelines as the viewer.  It’s a neat trick, and a great way to drive the mystery forward even though it limits the suspense much of what has happened/will happen next.

The final result is a show much like Season Two, where the ‘hook’ relies more on the viewer being curious as HOW something happened than WHAT is going to happen.  Where most shows take an “and then, and then, and then” approach, Pizzolatto’s True Detective series rely much more on a “so that means that, which means that, which means that” approach to building a narrative.  That is a strange way to run a mystery, where a new bit of information can provide a whole new context to minor lines of dialogue and even fragmentary visual shots.  As always, the show earns a second and third viewing, burying hidden bits of meaning and import in places that won’t be obvious until you’ve already passed the finish line at least once.

It’s a smart show that doesn’t hold the viewer’s hand.  It demands much of its viewers, and the more attention you put into it, the more you’ll get out of it.

The conclusion, as usual, is satisfying despite not tying up every loose end.  The hard lives of the detectives continue, as do those of their families.  Not every crime is solved and not every criminal punished, but that’s okay.  The important knots are cut and loose ends are ties up, and that’s enough after such a long and difficult journey.

Check the discount bin at Wal-Mart.  The full seasons have been going for ten bucks.  Or get your own digital copy via streaming service here: