Been breaking out the old Black Ops for a bit of the one-two lately.  The African militias work great as disgruntled Americans, and now we can run some domestic, near-future wargaming on the streets of Bloody America. 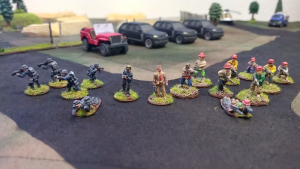 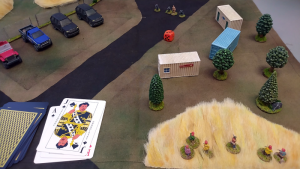 It’s a card driven system that works really well.  It feels strange to play a full game of four turns that contains so much back and forth.  In this scenario the cops are escorting a political prisoner from a small backwater airport to a waiting off-site transport vehicle when they are ambushed by Team Red Hat. 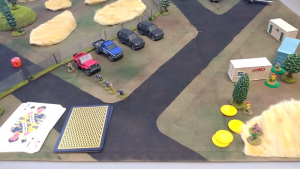 Team Red Hat has a slight edge in numbers and motivation, which make up for a lack of training and overall competence.  The above shot was taken moments after the balloon went up – yellow tokens represent noise counters that will surely alert the SWAT Team Leader that it just got real, yo. 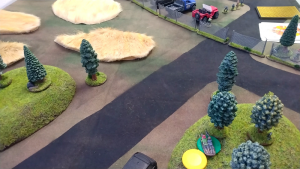 And finally, for a last bit of eye candy, a hidden sniper opens up from the hilltop just next to the escape vehicle, to good effect.  The green ship indicates that he was hidden at the time he took his shot.

A fun game, easy to film, and just about the only real world satire you’ll see outside of a webcomic these days.  Look for it on the Joy of Wargaming this week.
Making Adventure Fiction Great Again
Subscribe today to be first to hear about my new release, plus receive a copy of a free fantasy novella!
Follow