So this was a bust.

Perhaps a bit of explanation is in order.  I’ve been painting a LOT of figures for miniature wargames lately, and chewed through most of what YouTube has to offer a hobbyist in my preferred genres.  That means trawling the muck of streaming services for hidden gems, of which I have found a couple.

Bruce Willis has entered the ‘anything for a paycheck’ phase of his career.

Michael Chiklis is a safecracker who gets betrayed on a heist gone wrong and hunts for whatever while Bruce, his sponsor, stands around an empty building floor yelling at people as they spout long, dreary lines of on-the-nose exposition. 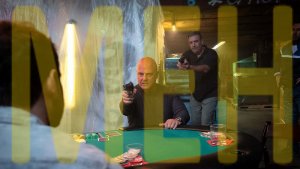 Sure, it’s got the inevitable betrayals and the whole hero who is an unstoppable force seeking revenge thing going for it.  But the dames are hard-edged, the city ugly, and the soundtrack nothing but idling ambient noise that fails to add to the tension.  The shoot-outs go too long, the characters have no depth, and the cheapness of the production shines through with every frame.

If you’re looking for a great heist flick, this ain’t it, brother.