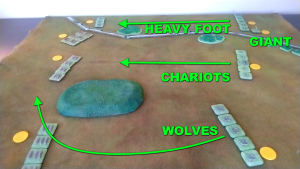 It has an undeserved reputation for being byzantine and difficult to parse and put into practice.  A reputation that, now that I have a dozen games under my belt, makes a lot more sense.

Chainmail is a game written to be played.  In typical Gygaxian fashion, the rules consist of a series of subsystems bloted together like some Orkish land-walker.  Like those Stompaz and Gargants, Chainmail seems needlessly clunky, bulky, and unsophisticated.  And yet, it works.  Much of game consists of the four Ms – the movement, missile, melee, and morale – but unlike modern streamlined games each of those four quadrants of the miniature wargame operated based on their own rules of engagement.

Putting it all together in your head and figuring out how they all intersect is a herculean task.  Putting them all together on the table, however, you can see that each subsystem stands on its own because each one is designed to fulfill a unique purpose.  Melee and missile fire are two different actions that do different things and in Gygax’s ruleset they work according to their own internal logic.  The total package operates much better than the sum of its parts might indicate.

Modern rulesets – that’s a funny word, isn’t it?  Rule…set.  There is an implicit understanding that complex games such as miniature wargames are not merely a single rule, but sets of them strapped together with varying amounts of spit, bailing wire, and prayer.

Anyway, modern rulesets have their advantages.  Streamlined, simple rulesets that free up processing power for tactics and strategy are not to be disparaged for taking a different tack.  But there’s something refresheing about playing a game that treats each unique aspect of wargaming as its own little thing.  And particularly one where those subparts fit together so well in practice, if not so much on the page.

Which brings us around to an important piece of wisdom that bears repeating:  when experience speaks, let reason be silent.

There are a lot of game commenters out there in internet land who have a lot of thoughts and feelings on games that they have read once or twice.  They read the rules, figured it out, and now feel very comfortable explaining to you, dear reader, what they just know based on a reading.

Don’t listen to them.

Not when people who have experience gainsay their theories.  Those are the people who knock Chainmail for faults and flaws that it does not possess.  They are posers – non-gamers who posture as experts – who have convinced themselves that they have unique insights that can guide you to a better understanding of a hobby that they themselves do not understand.

And give the game a shot.  Chainmail can be played with cardboard cut-outs to represent unit positions.  Mark casualties right on the cards.  You’re sure to fund some hidden aspects of the game that even I, with my limited experience with the game, have missed out on.