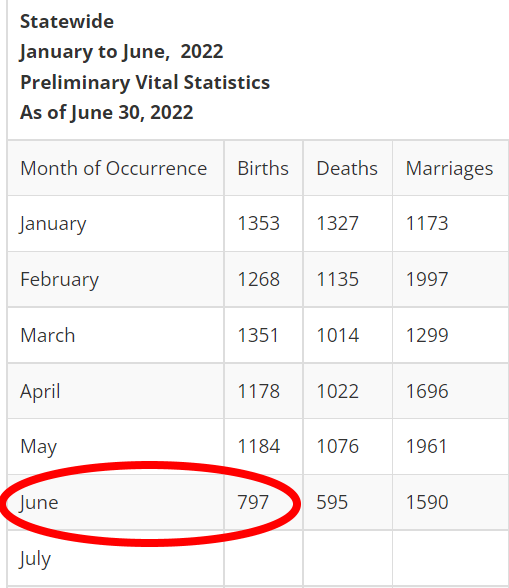 Prompted by this post discussing the situation in North Dakota, I pulled the birth numbers for my home state of Hawaii. This is public data made available by the Department of Health and presented online here (for now).

That number for June of 2022 is staggering. That is a single month drop of over 30%.

If you project the births through the first half of the year out to the end of the year, you wind up with 14,262 births compared to the previous year’s total of 15,652, for a drop of 8.8%, and that assumes that the trend over the last quarter bounces back up.

But hey, given how hard the year has been for most Americans, a single-digit decline might be well within the realm of probability.  There is also the possibility that the decline started in 2021 and we haven’t captured the beginning of the falling trend.  We can reduce the effect if we compare 2022’s number to the average over the last ten years.  running the numbers indicates an average of 17,696 births per year over the previous decade.  Using that standard, we see that 2022 births fell by 19%.

First, I pulled the monthly data going back to 2011.  That’s a full ten years of data that we can use to compare to the first half of 2022.

Using data available through the US Census Bureau, I was able to normalize the monthly birth records by annual population.  Hawaii’s population has been pretty steady over the decade, showing a slight increase from 1.41 to 1.47 million over that time, or a 4% increase wait what?  So even as Hawaii’s population has grown, the 2022 births are at a record low?  That can’t be right, can it? 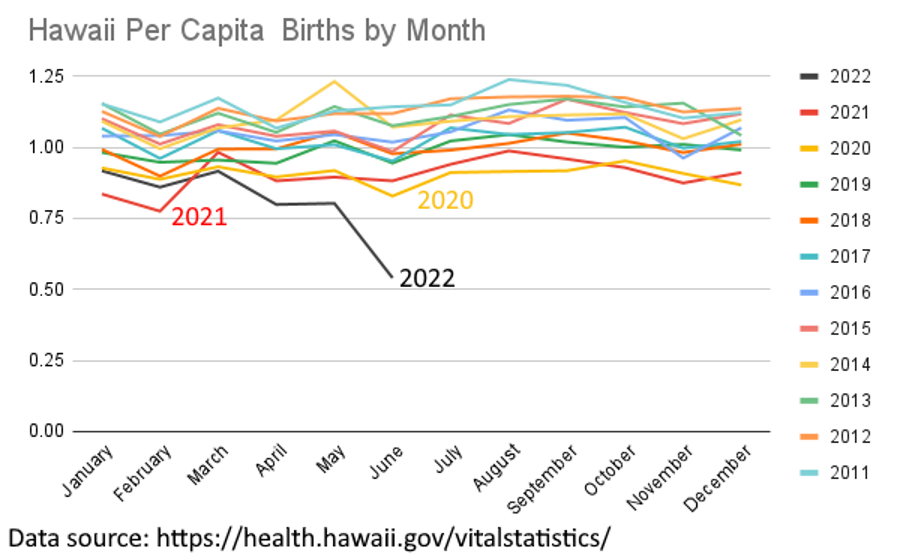 Let’s look at the annual trends in the graph above.  August and September are pretty good months for births as those babies conceived over the holidays start showing up.  Meanwhile, June is a particularly bad month for births every year on record.

There’s something going on here. 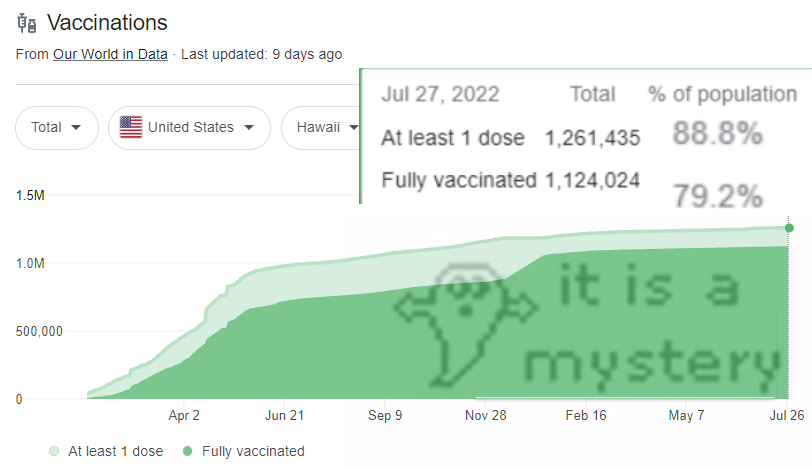 You can double check my math and numbers here.  We’ll try to remember to update this chart when the next batch of numbers drops.  Maybe it is a one-time anomaly and the births rebound in July.  If the last ten years are any indication, the number will go up.  But how far?  To pre-2022 numbers?  Or just the usual little rebound?

Bear in mind there is a good chance that the 2022 numbers will be revised.  The people getting paid to not notice this collapse will soon make the case that my methods are flawed because they use actual data.  They will argue that actual, recorded births are a bad indicator of how many people were born in any given year – they now know that computer models and statistics are a better method to use than actual counts.