Over the last couple of years, the lads in the #BROSR have reinvigorated the ossified field of tabletop RPGs by incorporating the solid design principles laid down by the giants of the pre-1980s collapse.  We’ve spilled a lot of ink – and I’ve published a number of videos – documenting the process and results, but we have not as yet thrown down an easily digestible introduction.  Let’s fix that with a short blogpost.

Before we get into the meat of the issue, let me remind you dear reader that this new-old style of play is two things:

Which combine to form a two-part Voltron of a Get-Out-Of-Jail-Free card for me.  Convenient, innit?

It’s more than that.

It’s YOUR Get-Out-Of-Jail-Free card.  Take what follows are run with it.  Be bold.  Try something that shouldn’t work, fail spectacularly, pick yourself up, and try something else.  You are allowed to do this, and if your gaming group doesn’t allow for it, get a new group. 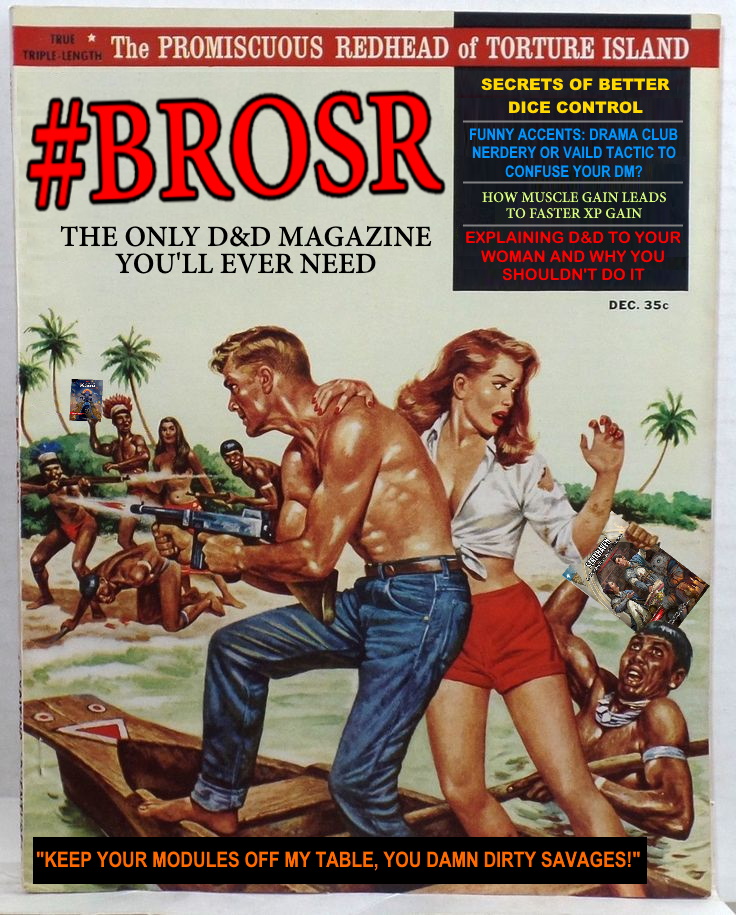 You are not playing in “the DM’s world”.  You are playing in a shared world where EVERY player deserves a chance to create.  Every player deserves a chance to add his own ingredients to the mix.  This is a shared world not just in name, but in practice.  The DM does not have absolute veto power over every NPC and every faction generated by the players.  Instead, he opens the creative process to them, and all share in the workload of creation.

Stop thinking of the DM as anything other than just another player.  He is a player with a unique role to play, but still just another player.  He is not the final arbiter – there is no final arbiter.  His role is to adjudicate conflict between actors within the game.  Sometimes that means adjudicating between PC and NPC, but it can just as easily mean adjudicating between NPC and NPC, and between PC and PC.

It’s okay.  Conflict is the air we breathe and the water in which we swim.  Conflict is a GOOD thing.  It is the whole point of the exercise.

As an example of real calendar use, in one high level game, the player of a Great Catholic Church located well behind enemy lines showed the DM that an approaching day on the calendar was, in our world, the Feast of Saint Michael.  He argued for a bonus on his attempt to request aid from the Archangel, which made the difference between weal and woe.

How do you ensure that the players operate on an even footing becomes an issue in games of this sort.  We all know that some players can devote more attention to the game, attend more sessions, have a better grasp of the rules, are better at cajoling other players into their plans, and so on.  When you treat the entire game world as a group’s plaything, you also run into the difficulty of tracking all that is going on.

These are two problems in search of the same solution.  What we call Jeffrogaxian timekeeping.  This is an old trick that pre-dates it’s appearance in the AD&D DMG, and one that was lost to the hobby’s detriment.  It is simply the process by which the game calendar advances by one day for every day that passes in the real world.

In practice, this means that a tabletop session can advance the clock as far as they want, but for every day they play “into the future”, they will have to wait a day to use those characters again.  This not only locks out the characters, it locks out their destination.  If they are engaged in a delve in a dungeon then no one else can enter that dungeon until they leave.  It’s a simple way to avoid paradoxes, and it empowers players to press their luck.

This process also opens up play to higher-level interests whose plots and plans span months and years instead of just the next delve.

In one case, we saw a D&D party sail to a new continent in order to explore and connect with a new “campaign world” being run by a friend.  The journey alone took several months, and in a single session those characters fought several sea monsters, raided an island temple, and fought off pirates.  They stopped just as land was sighted.  Months later the original DM reminded everyone of this hanging plot thread, and handed the characters off to the new DM, who seamlessly incorporated the new characters into the adventures in his continent. 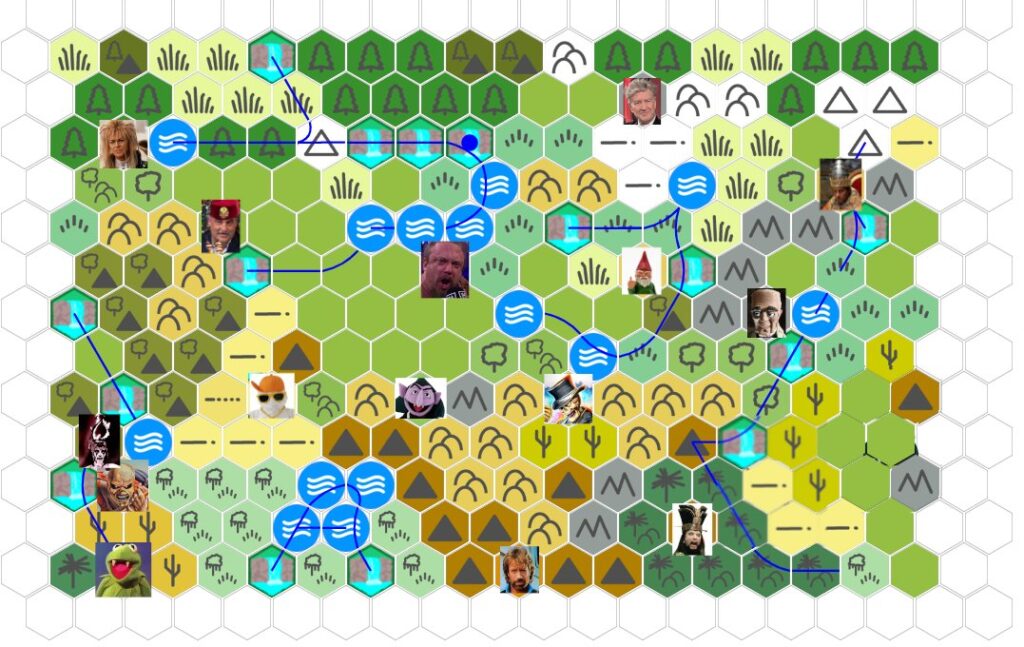 The third leg of the BROSR style consists of turning the major powers over to player control.  If there is a council of wizards, let one player decide on their goals, resources, and strategies.  If there is a usurper plotting to overthrow the friendly king, let one player decide how the usurper’s network operates and when they plan to strike.  If there is a thieves guild, let one player decide how they track down and deal with independent operators within their jurisdiction.  Eventually – if they are players worth the name – these “patrons” will come into conflict, and eventually they will see the Player Characters as a useful ‘cutout’ or ‘wild card’ that they can use to fulfill their goals.  By adopting this higher level of patron play, the DM eases his workload and lets the world spontaneously generate adventures in which the players can take an active role.

Even without directing the Big Picture, the DM still plays a vital role in a lot of ways.  He can preserve the fun of fog of war.  He can adjudicate the success or failure of plans based on a more complete knowledge of the situation.  He can suggest ways by which the patrons can take advantage of the existence of PCs to further their goals.

In practice, this means that the patrons are shared resources.  When no play is happening at the table, the patron player sits in the driver’s seat.  During a D&D session, the DM will take back the reins and control that faction.  He may stop and ask the player for advice – even if that player is currently at the table running a PC opposed to the faction! – or just run it as he sees fit.  Don’t sweat the difference between player knowledge and PC knowledge.  Good role-players deal with that all the time, and if they have no experience at it beforehand, they’ll pick it up pretty quick.

With patrons, the DM’s job returns to that of a referee looking to rule in the fairest way possible.  He loses the ability to choose what result works best “for the party” and instead has to choose based upon what is most reasonable for everyone involved.  He cannot play favorites for or against the players, because every side is a player.  He cannot play favorite for “the story” because he does not know what the story is.  He probably doesn’t have enough information to know the full ramifications of his decision.  So he must adjudicate based on the solid ground of “what is the most reasonable thing that would happen in this situation?”.  Or perhaps he chooses several reasonable outcomes, assigned probabilities, and rolls some dice to decide the ultimate answer.

You have to exercise some care to ensure that abuse does not occur.  A player who treats his patron faction as an extension of his PC has clearly violated the first axiom of “we’re all in this together”.  He is still trapped in the “spotlight” and “gimme everything that is not nailed down” mindset.  This is a childish way to play, and must be guarded against.  If you and your friends are adults, it shouldn’t be a problem.

These three principles are easy to lay out.  This post is only about 1,500 words.  Putting them into practice involves a million little choices, and the end result of those choices is not always clear.  One thing that is clear, after numerous instances of these principles being implemented, is that they work to create deeper and richer campaign than any you’ve ever played before.

They work for any RPG you care to name.  The precise methods of implementation depend upon a host of factors.  Are you running street level or god-tier?  What genre are you running?  How many factions are present?  How do you track the resources for factions?  How much fog of war do you want?  How much workload can the DM handle?  How much use do you want to make of social media?

There’s no simple way to explain this.  All I can tell you is that, if you want to elevate your game and you’re willing to give it a shot, you can find a way to make them work for you.

Your game and your implementation will not look exactly like that seen in #BROSR games – which are varied themselves.  Instead, your games will take on a unique character, one that is a reflection of your own tastes.

And you will never want to play the old and ossified style of episodic play again.