Remember that sweet map by Dyson I showed you yesterday? Here it is again, marked up and ready for some serious analysis.  It really is an elegant design with all sorts of architectural features that work in favor of treating it as multiple dungeons. 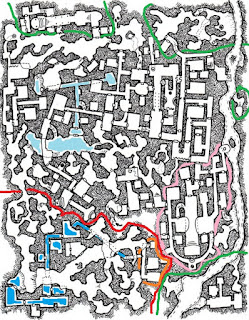 First off, notice that big red area is connected to the greater dungeon by only one passageway.  There’s only one way in or out, and it’s tucked pretty far away from the dungeon entrance.  Clearly, that’s pretty deep in the game.

What’s more, there is a small cluster of rooms in orange tucked way back in the dungeon behind multiple secret doors.  That’s the lair of the boss of the whole shooting match.  That’s the home of the lich or deranged wizard who thinks he runs things.

The light blue areas are shallow waters just barely deep enough to hide all sorts of nasty critters that low level adventurers should avoid.  That will keep them penned in to the right and upper portions of the map until they are really ready for the red danger zone.

The pink area is clearly a temple of some sort and (if you ignore the latrine on the right) it’s connected by only two obvious doors and one secret door.  Another easy level to carve out.

The greenish areas are also islands with only tenuous connections to the rest of the dungeon.  In my plan, they become mini-dungeons, sub-levels to use the vernacular, that can be skipped altogether.  In fact, they will wind up with guardians, but a treasure to be named later.  We’ll wait until that dwarf wonders where he can get a legendary throwing hammer, and we’ll stick it there for him.

There are a few details that need to be changed around, and I’m not going to use all of those lines as they stand.  Next time I’ll show you exactly how I sliced up the dungeon, and what levels each little portion of the dungeon represents.  Maybe a few words on other ways to let players know that they are running around in areas that are beyond their abilities.