Skip to content
Ground Zero Games makes these spiffy little figures they call “Sci-Fi Mercenaries” or somesuch, but they’re really space orcs.  We’re gonna go with the ‘black primer/white drybrush” method on these bad boys.  As my first 15mm figures, I’m not sure how well it’s going to work, but it’s hard to mess up space orcs.

Already I’m reminded of the benefits of the bigger scale.  It’s so much easier to modify and customize figures.  That sporc warlord now holds a knife taken from an (28mm) Imperial Guardsman.  In its owner’s hands it is a small knife; in this guy’s hand its a great big powercutlass.  These sporcs are going to be the pirates of the Aboxverse, so he’s gotta have a cutlass. 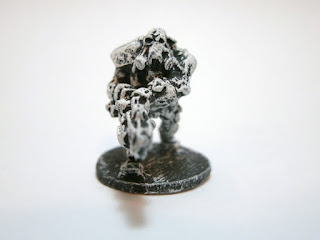 Here’s another quick customization.  The gasmask on this guy is another plastic piece from the Imperial Guard sprue.  It’s just the teeniest bit off-kilter, but it’ll do.  These little touches give the heavies a bit more variety. 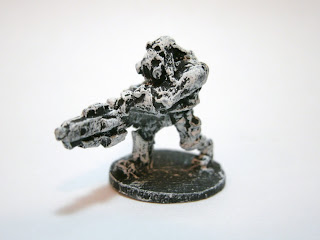 Last but not least, the grunts of the sporc-pirate raiders.