Osprey’s Black Ops uses a card driven activation system.  It’s a randomized IGOUGO system broken up by held actions, orders, and suppression fire.  As can be imagined, suppressing fire is more likely to have an effect, but less likely to cause casualties.  Each hit forces the target to choose one of three bad options: do nothing for the next activation, duck back into cover, or take the hit and make a wound roll.

Where it gets interesting, is that suppression fire can be targeted at a visible model…or at a point on the ground.  The suppression markers sit there like a big fat landmine daring the opponent to move anywhere within three inches of the area being suppressed.  It’s a great way to force your opponent to make sub-optimal choices.  If you need that squad to get across the street, you’re going to have to risk the hits. 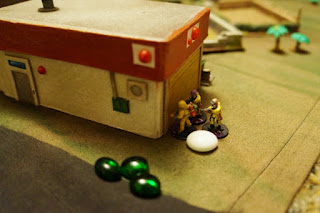 The photo on the right shows just such a situation.  The three green beads represent three suppression ‘hits’ laid down by the hazmat suit’s opponent.  Since the hazmat guys cannot be seen, they cannot be targeted, but the opposing heavy can still force them to keep their heads down.  If they move out from behind the corner, they will be exposed to that gunfire.

Where it gets interesting is when just one of those hazmat models is visible to the shooter.  In Black Ops hits are spread around the squad in equal numbers, meaning that the shooter is actually targeting all three models, even though only one can be seen.  That sounds crazy until you think about it for a bit.

This tabletop pretend gunfight is a simulation of a crazy simultaneous charlie foxtrot.  Although our little dudes move specific distances in discrete little hops and jumps one after another, that’s just a crude representation of the swirling and fluid chaos of battle.  So what really happens in a case like that is the squad dashing up to the corner, taking a couple steps out into the road, and then being forced to duck back into cover.  Maybe they make it in time, maybe they take a few hits.  Either way, the place they end their movement isn’t always indicative of a snapshot in time, but like the location of an electron around an atomic nucleus, their exact position at any given moment is…somewhere in or around a general point centered on this model.

You think that’s something? Wait for tomorrow’s post on Shrodinger’s To Hit Roll.