Skip to content
Here’s another blast from my college day past.  Just some bargain bin big old dude.  He is ostensibly a 28-mm scale figure, but he is a giant of a figure, standing close to 10-feet tall.  In scale, of course.  ﻿ 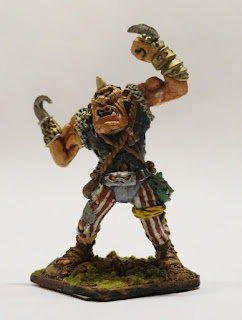 Captain Hook One Eye here has also seen use stomping around a miniature city fighting next week’s old time figure.  In fact, most of these archive figures have been bouncing around a box waiting for a decent monster rampage set of rules.  And a big old 6mm city.  That’s somewhere on my list of somedays.