In the grand old D&D tradition, going down a level in Castle Meatgrinder means going up a quantum step in difficulty.  You won’t find black dragons or pit demons on level II.    One of the few sops to metagaming tolerated at my table is that understanding that you shouldn’t go down too far past your limitations.  To help the players, when characters do advance down a level, the players will know it due to the long length of the staircase, pit, or chute. 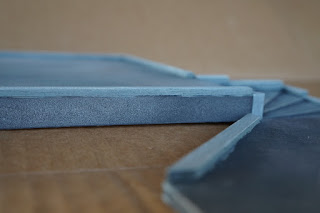 That said, elevation differences are one of the best ways to add variety to encounters, and beef up weak opponents by giving them the literal high ground.  In a 3D environment such as Castle Meatgrinder this is often accomplished through the use of daises, platforms, and the odd wall crawling beasty.

This small collection of half-level rooms open up the possibility of fighting in cramped quarters on staircases that don’t equate to the full change in difficulty level typically encountered.  There isn’t much room in the One Box to Hold Them All, and these rooms take twice the space of the rest of the rooms.  As a result, these rooms are just a dead-end offshoot of the main level.  It may be possible to use one of my straight staircases to provide a second way to access the larger room shown here.  Have to experiment a bit with that. 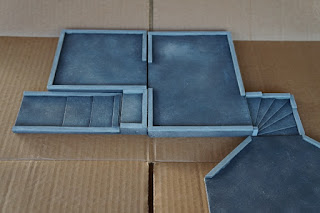 You could double up on the standard 5-mm foamcore to make rooms like this, but I had some thick foam sheet left over from a previous project, so this was a case of making use of what was on hand.  Otherwise, the construction details and paint scheme are the same as the rest of the dungeon.

An extra little piece of three by three foamcore called out for something different, so it got turned into a curved flight of stairs.  That gives this set-up two different ways to access the upper half-a-level.