Any trap good enough to scare Indiana Jones is good enough for Castle Meatgrinder.  Obviously, these little gems won’t make an appearance until they are triggered or disabled.

I debated with myself over whether markers for traps were even necessary for Castle Meatgrinder.  They are, after all, single events that can just be described as is.  Either you find it and avoid it or trigger it, take HP damage, and then move on.  Why waste time on a 3D terrain piece for something so transitory?  Two reasons:
1.  They look pretty cool.  They help to make the 3D version of Castle Meatgrinder look as deadly in person as it does in your head. 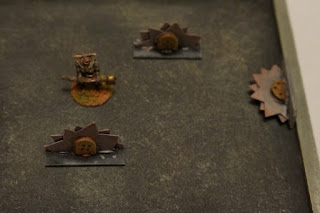 2.  Making a terrain piece and putting it on the table changes the way the game is played.  These go from forgettable eye-blink damages to real and lasting features of the dungeon by marking an area always and forever as “Here Be Pain and Dismemberment”.  In an empty room, they are no big deal, but in a room where the characters might face a squad of orcs?  Or one they might have to flee through?  Now you’ve added another variable for the players to have to juggle.  Maybe your thief, in order to get into position to gank the enemy spellcaster, has to deal with hiding in shadows and risking a leap over the whirling blades of death.  That’s the something added by building physical markers of the blade traps.