Castle Meatgrinder is an extension of a Lovecraftian chaos-demon-god, oozing into the mundane world.  It tempts the unwary with promises of riches and power, but hungers for only the bravest and fittest, and so guards its lucre by extruding guardians both foul and vicious.  As heroes plumb its depths, and as it consumes ever stronger heroes, it deepens and grows and offers up great treasures the better to tempt ever more noble prey.

Not all denizens of Castle Meatgrinder were birthed from the mucus of its raw chaos.  Some men believe that they can tap into the power of the Dungeongod, and attach themselves lamprey-like, to its bulk.  Taking little, but adding to the chaos of the dungeon, they are welcomed by the dream-like sentience.  They lure the unwary, and sometimes even drag unwilling innocents into the depths of Castle Meatgrinder in the hopes that the screams and pain of their sacrifices will appease the Dungeongod, and it will grant them power and wealth.

They are the Cult of the Dungeongod.  They are a mix of figures from RPE’s Southern Death Cult and 15mm.co.uk figures.

First up, these Hooded Executioners.  The pack comes with six figures, but one was miscast, and not needed.

Most of the rest are from the Blighthaven pack.  That pack comes with three more figures; the zombies don’t work with the human cult angle, but they’ll make a re-appearance when I paint up the undead faction for Castle Meatgrinder. 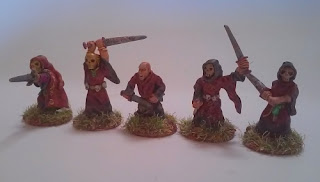 I couldn’t decide whether to go with black or red robes, so I went with both. 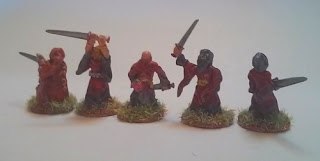 The guy on the left in the next photograph is probably supposed to be a zombie figure, but he  is clean enough to look like a degenerate human, so he goes with the Cult. 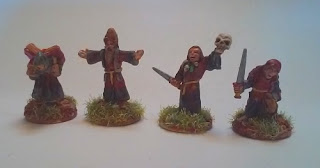 The two figures on the left, the guy with the grimoire and High Priest Come’atmebro, are list on 15mm.uk.com’s website under the HOF sci-fi line as Cultist Sinners Retribution.

That full pack comes with a third cultist herding little creepy crawlies.  In retrospect, those critters would work well in a dungeon environment, too.  Kinda regret not picking those up at the time.  Here’s a shot of the book holder and High Priest working together. 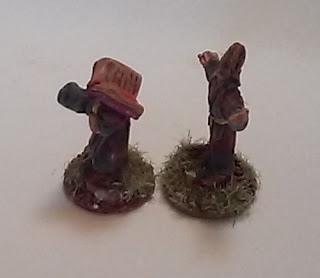