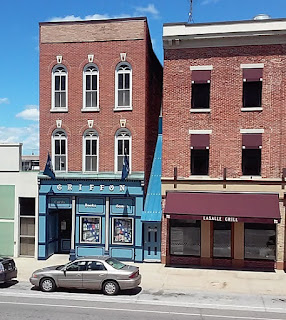 As a wee lad me dear old mam didn’t have the money for fancy moving-picture shows or eateries with cloth napkins, so she would drag her brood of a half-dozen savage whelps through the streets of the local big town, exploring the river walk, the museums, and a little light window shopping.

On one of those excursions, she herded her children into a small used book store called, The Griffon.  Inside were the expected used books, many of the fantasy and sci-fi variety and many of the military history variety.  To one side sat a glass case with several dozen small gray toys, knights, dragons, wizards, and monsters.  Those little gray lumps captivated at least one of the long-suffering woman’s sons, and he soon learned that they could be used in a new kind of game called Dungeons and Dragons.

In the back room, half a dozen slovenly ‘old people’ – the mists of memory now identify them as local university students – sat around a table.  One had set the scene of a car chase through a desert wasteland, and told another that the grenade hurled by an apocalyptic savage sat inches from his hands, caught in the groove between the hood of the car and the windshield wiper.

“Can I reach it?  Grab it and throw it away?” the young man asked.

“You can, but that will be your entire turn,” the storyteller responded.

Instinctively, the little boy understood exactly what was going on.  This was one of those choose-your-own-adventure books played out in real time.  With dice and rules and complete freedom of operation and no wait, Mom, I want to see this.

That day played a pivotal role in the life of that little boy; by now you’ve all guessed is your old pal Warren.  That shop was my main reason for wanting a driver’s license and job.  No more begging for rides, no more scrounging money for figures and paints, no more wondering how to find players.

Recently fortunate enough to be in town, I dropped in on the old game store.  It only moved location once decades ago, but it is now cleaner, brighter, and bigger than ever.  It has a full upstairs game room open full time now, rather than a dingy back room separated from the shop by beaded drapes.  Best of all, it is still run by Ken and Sarah, the two wonderful people who introduced toddler Warren to this great hobby of ours.  Over the years my gratitude has often been expressed financially, but not nearly to the extent that they deserve.  They are the epitome of what every FLGS owner should be – patient, knowledgeable, and completely cut-throat when they sit across the table from you.

They will be having a 40 year anniversary of the store opening party this coming October, and I regret immensely that I can’t be there.  If you can, you should, it sounds like it will be a lot of fun.

Oh, and those little gray toys in a small downtown shop in the mid-1970s?  I still have the one that she bought me for the princely sum of sixty-five cents.  It was an 25mm Grenadier knight currently held in deep storage by a brother, along with a box of all the high-school painted figures we ever bought.