For the most part, the things I review or talk about are those that excite me enough to sit down at the keyboard.  That means most of my posts are about things that I like, and that’s a lot of things.  I like liking things.

That’s not always the case, though.  At the risk of sounding like a ranty old fuddy-duddy troll, there’s a trend I’ve noticed of games that just don’t look at all appealing.  The blandly named Darkness Sabotage is one such game.  Let’s get cynical and self-deprecating about it for a bit, shall we?

There seems to be a trend out there for big box co-op board games with enormous figures, massive amounts of equipment, and hefty price tags.  The latest offering to cross my awareness is the beast that is Darkness Sabotage, the Boardgame.  The backstory is something about 4 to 6 pirates(?) looting a chaos-hellship(?).  It’s hard to tell from the KickStarter what’s going on there, they seem to want the characters to be dark and brooding anti-heroes and heroic attack-the-gates-of-hell types at the same time. 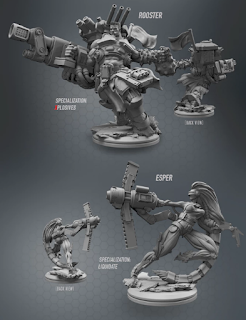 …and a strong suspicion that none of the figures in the box are built to scale with anything else on the tabletop, it doesn’t really matter.  The clumsy poses, the weird balance, the odd choices for detailing, and the general ‘feel’ of the game just rubs me the wrong way top to bottom.  Even the strangely distended anatomy hurts my eyes, and I’m a guy that likes the impossible bone structure of your standard Space Marine.  The makers of this project seem to be trying so hard for each figure to look awesome, that they forgot to make them look good.
Then there’s the mess of accouterments needed to play the game.  Twenty dice in two different styles, countless cards, counters, and chits, and your bog-standard chaos style enemies with various special abilities seems way over the top.  If you need all those sub-systems to craft a decent game maybe you need to sit down and re-think the game’s concept.  It worked in 1970’s games because we didn’t know any better, and it works in the OSR RPGs because that’s a very different play style paradigm.  Here it just makes the prospect of picking up the rules make me tired.  I’m already a tired old man looking up at the chalk writing on the ceiling rafters and mentally measuring the rope, don’t encourage me. 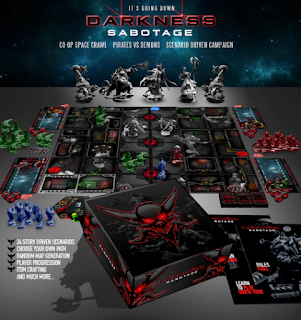 Then there’s the recent trend towards multi-player, but co-op against the game, style games of which this is a proud member.  So it takes multiple players to beat the artificial system behind the game.  Every co-op game that I’ve played wound up feeling like I was playing solitaire, but in a way that forced me to jostle somebody else’s elbows and wait until flipping over the next card.  This game could break that mold, but that’s a hard sell for this grognard.

Especially with a price tag of ninety bucks.  If the game is any fun at all, they should be able to produce a map and counter version for twenty bucks that retains the exact same feel.

Taken altogether, it just seems like one big slapdash disaster of a game to me.  Yet somehow this Homer Simpson Car of a game earned around $150,000 in backing.  And this is just the latest in a series of games I’ve seen lately.  So somebody must like this style of board game play.  Probably those dang degenerate kids doing doughnuts on my lawn.  If this is what the cool kids are playing these days, pass me my 48-page OSR rulebook and six polyhedral dice, because that’s all I need for an evening of fun.  You kids can keep this over-priced box of disaster for yourself.

If you disagree with my assessment, no hard feelings.  To show you it’s nothing personal, here’s that link to the KickStarter a second time. Now it’s time to soak my dentures, drink some ensure, and check the TV guide to see what sort of hi-jinks that Gilligan will get up to this week.