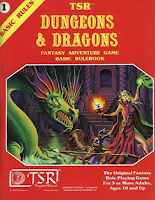 By way of Gamers and Grognards:

That’s right. There is a Toy Hall of Fame, and this year D&D is a nominee for induction! As of right now, it has the highest number of votes. Let’s keep it that way and get D&D into the Toy Hall of Fame! It might need votes as it is up against a couple that could be heavy hitters (not the least of which is Transformers.) Follow  the link and cast your vote:  Toy Hall of Fame

How is this not already in the Toy Hall of Fame?  It has to be because it’s more of a game than a toy, but it’s up and in the running now, so let’s make this happen.  D&D is already in Games Magazine’s Hall of Fame, but why not vote anyway?  Any little bit of publicity that helps grow the hobby is worth a few clicks.