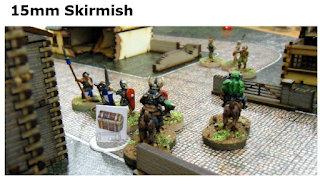 There’s a new blog on the block that should be of interest to anyone who has been following my own conversion over to the (latest) One True Scale: 15mm Skirmish.  You probably already know Sam Pate from his blog, Wee Blokes.  He has decided to open a blog specifically for his forays into 15mm skirmish gaming.
From the man himself:

One of my plans for 2017 is to push on with my delayed exploration into 15mm Skirmish Gaming. I know it happens but the majority of 15mm posts I find are either figure reviews or larger battle reportsgames. Similarly most Skirmish posts I find are in 28mm. Having dabbled my toes in I feel that 15mm Skirmish has something different in its play, more than “the same but smaller”. The scale distances and movement seem more open, so (in theory) the tactics could be as well.

Add it to your regular blog feed, because he has some of the best looking games around.  Unlike we eternal planners, he also posts a host of actual play reports.

Note:  I’m not actually a friend of Sam Pate’s, I’m really more of a yuge fan of his.