Who are we kidding? A project like this is never complete, it just goes into hibernation. As we round out the year of fantasy skirmish here at War In A Box, let’s take a look at where the project stands. At the current time we’ve got over 50 characters in four different races for player pawns.  We’ve got at least a dozen each of orcs, ratmen, lizardmen, undead, cultists, and frogmen.  We’ve got creatures from vermin to ogres, flying things, climbing things, swinging things, and tentacled things.  We’ve got traps galore and puzzles to boot.  As it stands Castle Meatgrinder spans ten dungeon levels, each with ten to fifteen rooms, and a few hidey-holes to allow for future expansions.

That’s a lot of stuff, but in keeping with the mission of compact gaming on a budget, let’s take a look at how compact you can make a D&D megadungeon if you’re willing to game in 15mm.

The plastic tub contains all of the dungeon floor tiles, and the Old Spice box contains the delicate dungeon dressing.  To give you a better idea of scale, that tub is designed to carry two reams of standard sized paper. 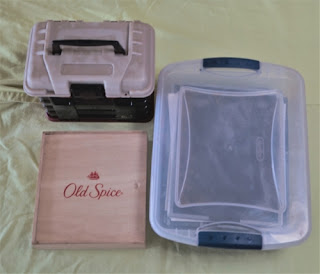 You won’t have any trouble carrying this mega-dungeon around a crowded convention hall. 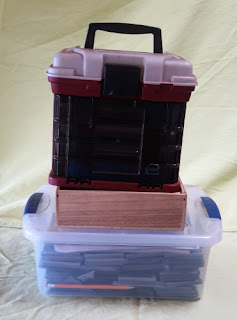 So what are we missing?  A few things: