My big box of fantasy grows ever larger.  Because of the recent additions, I found it expedient to streamline all of my terrain boxes.  The collection now includes one box of general ground terrain (drop cloth, woods, roads, streams, etc.), one box of sci-fi specific terrain (billboards, buildings, urban scatter), and one box of fantasy terrain (wizard’s tower, stone circle, the houses below).  With so little room to spare it makes no sense to duplicate effort on universal items.

These are all from the same manufacturer, Total System Scenics QRF Line.  Specifically from the Renaissance Scenics line. 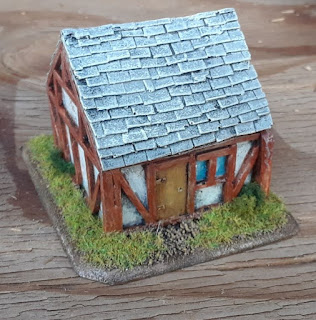 At just four quid each for the smaller houses and six for the larger ones, they certainly are affordable, but the castings aren’t the best quality.  These come in six flat pieces that have to be glued together, and the the thicknesses of the pieces doesn’t quite line up correctly, particularly for the roof pieces.  Those I had to trim down by hand to get the right angle.  The peak of the house meet at 90-degrees, but the casts don’t account for that, so you need to sand those edges down to 45-degrees to get them to line up right.  Without the right tools, I did what I could, but there was still a considerable gap along the peak of the roofs because I don’t have a miter in this size and stink at filling in gaps.

Getting these put together took a lot more spackle and effort that I’d have liked, but if you have the time and are better with the zap-a-gap than me, you could do a lot worse than these buildings. 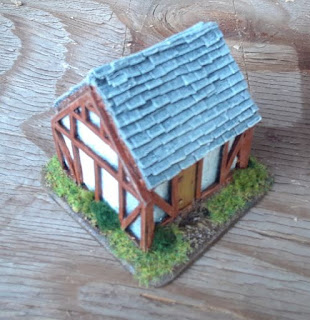 Here’s an example of the sizing issue.  The left wall shown here extends beyond the roof line, and there was no way to fix this without making the right hand wall look worse.  This whole building leans to one side, so we’ll call it the slum house if anyone notices.

I also picked up a few lengths of dirt roads made out of that latex rubber from these guys.  The roads came painted already and look great.  Those I can use right out of the box. 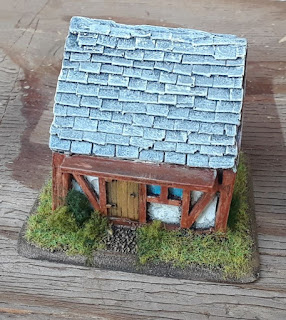 One of the things that I did to cover the gaps was use judicious placement of bushes.  The tall one to the left of the door shown here covers an issue with the wall and floor being mismatched sizes.

Oh, and check out that massive lintel over the front of this house.  Two of the four small houses came with fronts like this, and they don’t line up with the roof.  If used as-is, that is to say placed such that the lintel can’t be seen and allows the roof to overhang, then the sidewalls are too long.   I think they are meant to be used with the tall (two-story) houses and got mixed in with my order.  It’s not that big of a deal – I just split the difference a little bit, and with the right tools you could just carve that lintel off – but it’s one more thing that might seriously harsh a more serious wargamer’s mellow.

In the end, considering the price and final look, I’m not broken up about this purchase.  They took a little more effort, but will really look sharp on the table.