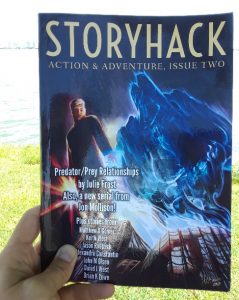 Bridging the gap between review and shill, it’s time to talk about StoryHack, an action and adventure short story periodical produced by Bryce Beattie.  He had the urge to produce a regular collection of short works that runs the gamut of genres, and that is a much bolder move than you might think.  The state of the art of marketing in today’s world of search engine optimization and direct focus marketing strategies and AI algorithms tells creatives that they should do one (genre) thing and do it well.  Readers don’t cross genres.  Target one niche audience.

That may be right, you may derive a lot more sales from a relentless focus on one niche like that, but the concept bores me to tears.  When Bryce announced his One Genre To Rule Them All, and that genre being action-adventure, I snatched at the ring like a toad-man with a frog in his throat.  And so you’ll see my own name gracing the cover of the second issue, but that’s not why I’m here today.  That’s just my oblique admission that this post might come off as a bit of a self-shill. My motives are as pure as the snows of nuclear winter, but that’s doesn’t mean I’m wrong when I say that Jason Restrick’s entry into the StoryHack library hits the jungle-action-with-a-side-helping-of-weird-tales nail on the head with a ten-pound sledgehammer.

The opening snatches you up in its arms like a 600-pound gorilla and the story doesn’t let go until the last passage and beyond.

Weary and haggard, I was alone in my study when there came a sound beyond the door.  Barely a knock: the faint thud of knuckles and the slow scrape of fingernails.  I started from my desk; not to flee – there was nowhere to run; nor to fight – but only to die on my feet.

The doorknob twitched.  The intruder stepped forth – a tall silhouette in the shadows.  Then, through my blurred vision I recognized the face of a friend, one who I had feared lost.

That’s how you start a story!  It’s a miniature drama all its own complete with mysteries set up and resolved, and more menace in the first two paragraphs than most Lovecraft knock-offs manage in a full blown novella, and we’re only getting started.  Our hero has to trek back to the source of his woes to remove the curse that afflicts, not himself – oh no, so such selfish motivations drive our hero – but to lift the curst on his friend, a curse he feels responsible for.  That’s the kind of unselfish effort that changes this from a tomb raider story to a heroic adventure, and part of the charm of the piece. 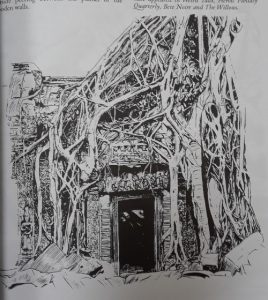 Restrick adopts the strong voice of a gentleman adventurer to tell this story of a lost temple that should have stayed lost, a cursed treasure recovered from degenerate jungle cultists, and a wise old hermit witchdoctor.  A tension runs through the story between the unshakable faith of the narrator and his best friend and confidante, and the dark and brooding menace of the jungle and temple ruins.  It speaks of danger at every turn, with only the brief solace provided by the wizened hedge wizard of the deepest Congo rainforest.

By my count the tale features at least three monsters, depending on how you want to count them, two warring gods in fine Weird Tales fashion, some hard hitting action scenes that leap from the page.  The amount of story packed into the brief pages of this tale is impressive, with nary a wasted word or thought.  Everything drives the plot forward towards a resolution that some may find unsatisfying, but which fans of the Weird Tales style will appreciate.

This is my goal as a writer.  To tell stories that can match the evocative spirit of the old stories as does Restrick’s “The Temple of Baktaar”.  It’s a story I’ve now re-read with a closer eye, not as a relaxing read, but as a writer looking to understand how Restrick manages to pull off this story.  It’s that good.

You can get yourself a copy here: