Begun, The Ember Wars Have 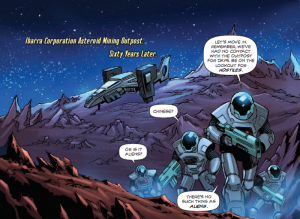 The talented team-up of Jon Del Arroz and Richard Fox has born its first fruits.  Those of us smart enough to back the crowdfund for the comic adaptation of The Ember War saga have received the initial offering.

It lives up to the hype.

The full run of 120 pages aren’t slated for release until April, but backers recently received the 24-page Issue #1 which lays the groundwork for the coming interstellar conflagration.  Set sixty years in the future, humanity continues to do what humanity does – they fight.  The tools have changed, thanks to Marc Ibarra and his mysterious benefactor, but the law of scarcity and supply and demand still apply.  Which leaves the door open for conflict ranging from espionage of the corporate and governmental varieties, and big damn space battles as well. 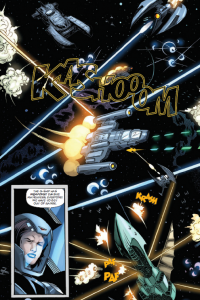 The action opens with the infiltration of a mining colony that went dark and the search for survivors, then moves on to the broader shoot-em-up of fleet battles in space, and delivers a short vignette that hints at big doings afoot in the Earth’s galactic neighborhood, and finally ends with a terrible realization that echoes the great hook at the heart of Battlestar Galactica.

There’s a lot to pack into the first issue, and if it seems heavy on the plot set-ups and light on the resolutions, that’s likely because we’ve got another 96 pages worth of comic to get through.  The characterizations are a little thin, but again that has more to do with pacing for the long haul than any oversight on the writers’ part.  With such limited space to work with, the writers make heavy use of the time saving device of tropes and blank slate characters just waiting to be fully fleshed out later.  They do provide just enough meat to hold interest and make this reader want to learn more about who they are and what they face. 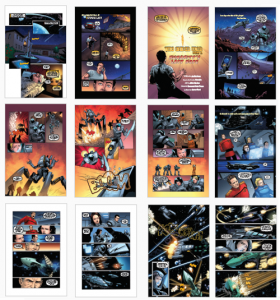 The art?  I’m not an art critic.  It works.  Jethro Morales’ aesthetic has enough detail to please the eye, without overwhelming the story with visuals for the sake of visuals.  The colors are vibrant, the lettering seamless, and everything fits together well.  One nice aspect of the artwork that jumps out even to my inexperienced eye is the dynamic layout.  Check out this scan of a few pages.  Note how often Jethro uses insets in splash pages or eschews rectangular frames.  That helps add to the visual appeal and drives the action forward.  It breaks things up and keeps you on your toes.

Finally, it’s worth noting that straight ahead sci-fi tales are woefully under-represented in the pages of comics.  The decision to bring a story like this – for those who care, it’s too early to tell if we’re looking at space opera or military SF – to the page represents a bold choice, and for my money it’s one that paid off in spades.  The cape genre has had over fifty years of domination and they’ve built and deconstructed and rebuilt those stories so often there just isn’t a whole lot of blood left in the super-stones.  The Ember War represents exactly the kind of diversity that mainstream comics lack – a diversity of genres and ideas.  It feels fresh and new in a way that no super-hero story can these days.

More so than any other comic that I’ve back, save perhaps only Alt*Hero: Q, this is one comic that has left me eager to get my mitts on the next issue.