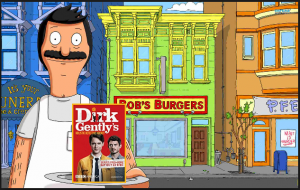 Under increasing pressure on the home front, Team Mollison re-upped Hulu for a few months. Their primary motivation was catching up on “Bob’s Burgers” – probably the best family show on TV right now.  The show is filled with fully realized characters who grow in depth with each passing episode.

Bob may not be the smartest cookie, and he may not be a great businessman, but he is a great father.  Long suffering and big hearted, he’s a good man, struggling to care for his family, and in so doing he serves as a role model for fathers – a strong contrast to the usual sort selfish incompetent stock character seen in most sitcoms.

More surprising still is the character of his wife, Linda.  She is loving and kind, but far from perfect.  Headstrong and quirky and fun, her enthusiasm for life actually results in her making frequent mistakes that can only be rectified by her husband.  That’s a storyline unheard of in our enlightened times, and because of it, she has some of the most memorable lines in the show.

The youngest child, Louise, is wise beyond her years and verges on a Mary Sue, except that her own eccentricities result in weaknesses that flesh her out and create internal conflicts of her own.  Gene, the middle child, verges on playing the village idiot role given his obliviousness and bumbling incompetence at pretty much everything he does save for music.  The annoyance that might arise from his clownish nature is tempered by the raw enthusiasm and good nature.  He really likes liking things, and in a world filled with cynics, it’s refreshing to see that kind of optimism.

The oldest, Tina, provides a counterpoint to her brash siblings with a sweet and timid nature.  At first blush, her uncertain steps from childhood into adulthood are ridiculous.  But they reflect a young woman’s uncertainty and misapprehensions and are written with such deftness and compassion that the viewer understands and empathizes with her, even as they laugh at her often self-imposed travails.  Hey, we’ve all been there, Tina.  We know how it goes.

While much too busy for the sort of binge watching that goes on in my house, I’ve been snared by the writing.  At times the gags in Bob’s Burgers rivals early Simpsons for their earnestness and cleverness.  Best of all, most of the humor in this show features the warmth and wry wit of flyover country rather than the hard edged sarcasm that dominates the coastal traditions.  Heck, the mere presence of a nuclear family that loves and cares for each other separates this show from the pack.

If you’re up for some light-hearted fun that won’t insult you and that reflects the normal and typical American family life, you should give the Belchers a shot.

On the more dramatic end of the spectrum, I’ve been experiencing Dirk Gently’s Holisitic Detective Agency.  It’s too early for me to give a recommend just yet.  As a BBC show it’s plagued with all of the usual issues.  Tiny women single handedly beating up hordes of bulky and well trained men.  A Dirk Gently who ladles the ‘quirky genius’ schtick on way too heavy at the outset.  A shadowy government military cabal we’re supposed to fear despite being shown as utterly incompetent.  It’s definitely a flawed work.

On the other hand, it has Elijah Wood in a dramatic role that uses his charisma and raw talent to incredible effect.  One of the kung-fu waif/stronk female characters manages her feats by way of an what amounts to a superpower level of luck.  Dirk, after being introduced as, “Remember Tenant’s Doctor Who?  I’m him turned up to 11!” settles down in fairly short order.  The cabal is revealed to be not so much incompetent as outclassed.  Perhaps I’m making excuses

The premise of the show revolves around the mystery of a murdered billionaire and the disappearance of his young daughter a few days before his death.  We follow Elijah Wood’s character who serves as the real heart of the show.  All he wants is to care for his sister, who suffers from a mental illness that keeps her shut in and requires expensive medications to function.  Thrown into the middle of the mystery, he slips into a shadow world populated by cults, possible aliens, police as confused by the strange events as he is, and the military cabal.

Overall, it’s a mixed bag, but you might find it worth a shot if you like convoluted sci-fi and conspiraciana, and you can stomach and look past the BBC’s typically excessive bullshit tax.  Once I finish the series, I’ll have a clearer picture of whether Dirk Gently deserves your time or not.  For now, it’s worth a shot.