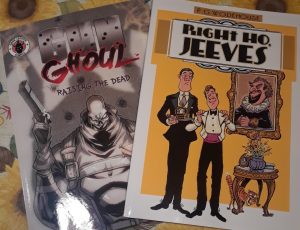 The comic omnibuses shown to the left represent the big splurge for my Christmas presents to myself.  A full review of Gun Ghoul will have to wait – the first issue in the collection piqued my interest but I’ve had a hard time picking it up since early January.  I just need a little more time.  Right Ho, Jeeves, on the other hand, came to me at the perfect time.

Adapted from the novels of Wodehouse, the story follows Bertie Wooster, an affable fellow who just wants to live his lower-upper class life in peace.  That prospect is complicated by the need to please the aunt who funds his lifestyle, and who summons him to her husband’s estate to enlist his aid in prying money out of her husband’s tight grasp.  The cast of goofballs creates a string of misunderstandings and botched plots that would rival any network sitcom.  The gags are delivered in a stately lower-upper class setting with enough dry wit among the slapstick gags to create a deceptively dignified read.

Reading Right Ho, Jeeves reminded me of my childhood.  Not because I was raised in an English manorial estate filled with colorful characters, mind you.  Rather, because it felt like reading a copy of Mad Magazine.

Stay with me here, Wodehouse as Mad Magazine makes more sense that you might think.

Me and my brothers thought we had to smuggle copies of Mad Magazine into the house because whenever the bright and obnoxious covers caught our eye on the supermarket shelf, Mom turned us down with a gentle, “That’s not appropriate for you.”  Our illicit readings proved her both right and wrong.  The kitchen-sink approach Mad takes to humor meant that the booger jokes and slapstick and puns rubbed elbows with references to adult themes such as Hollywood celebrity gossip, the last gasps of seventies culture, and the (then topical) Reaganomics.  While not damaging to a child’s psyche, most adult references whooshed over our heads like facts zipping past the notice of the crew at CNN.

What they did provide was a glimpse into a broader and more mature world waiting for us on the other side of puberty.  Reading Wodehouse presents the same sort of feeling, but looking backwards at once was and what might still be again, if America can get its act together and make some unpleasant changes in our immivasion and economic policies.

The art for Right Ho, Jeeves also evokes a strong sense of nostalgia for a time when comics were a medium of information exchange not entirely given over to children.  The smooth work and dignified cartoonish style used by Gary Kwapitz makes a perfect match for the same balance that Wodehouse brings to the line between dignified and adult humor laced with outright buffoonery.  The colors as well, warm and rich, never tilt too far into the realm of “sepia tinged nostaligia farming”, and instead provide a sense of immediacy that never lets the reader forget he is reading the tales of a bygone era.

Bringing this work to market is an incredible achievement.  Fantastically entertaining and enormously fun, we don’t yet live in a world where Right Ho, Jeeves can develop the popularity and accolades that it deserves.  Too fun for the snooty types that think books discussed on NPR are the height of culture and too mature for the eternal children that flock to Marvel movies, this book has a limited niche that would cause any mainstream editor to swoon at the risks.  It’s too much fish for one and too much fowl for the other.

Which isn’t to say that there isn’t market for it.  Hell, Frazier ran for twelve seasons, and it had the same feeling as Right Ho, Jeeves.  It’s merely to say that mainstream entertainment refuses to acknowledge the hordes of adults who grew up reading bootleg copies of Mad Magazine by flashlight under the covers, and who learned to appreciate that sometimes sophisticated humor can be delivered by smacking a heavy cream pie right into a blowhard’s fat face.