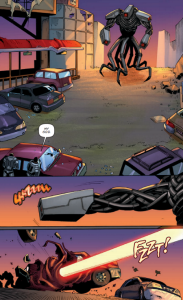 The third installment of Richard Fox’s “Ember War Saga”, adapted for comics by Jon Del Arroz and Jethro Morales, dropped for backers earlier this week, and the fun factor continues to ramp up.

One minor complaint about this issue is the lack of a splash page with a couple of “the story so far” summary sentences to help reorient readers returning to the saga after several weeks hiatus.  The action picks up right where it left off, and within two pages the reader experiences enough, “oh right, that’s a thing,” moments, to detract from the experience.  Admittedly, the bulk of the issue is a pair of fetch quests running in parallel, so it isn’t that hard to figure out.

Once the noggin’ gets joggin’ though, this issue brings a high fast ball by featuring non-stop action with only a last page exposition dump wherein humanity’s savior (kind of) explains the backstory shown in the last issue, this time to the last dregs of humanity.  It’s a fast read, packed with action and some fun stunts for the characters, including just a touch of pathos. 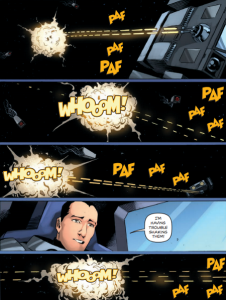 It’s clear now that we’re dealing with a Battlestar Galactica situation in which an alien AI sought to feed Earth a few “cheat codes” so that we wouldn’t be caught entirely flat-footed by the approaching genocidal Xaros.  That only comes after our plucky heroes race through an empty world and get involved in a running battle with a host of drones left behind by the Xaros after they wiped humanity off the planet.  The action proceeds into space and we get a little taste of ship-to-ship combat in there for good measure.

Now that we’ve spent more time in this universe, the action makes more sense, the stakes have been raised higher than ever, and as a result we have a lot more incentive to root for Team Humanity.

The art continues to serve the story well with a nice, clutter-free style.  Clean lines and smooth transitions make it an easy read.  The mech that appears in a few panels shows some awkward positioning, but my limited eye for artwork can’t tell if that was intentional to help illustrate the massive scale or just awkward posing.  So that’s all I can say about that.

As mentioned last time, this comic title features a welcome break from the usual cape comics that dominate the store shelves.  If you’ve a love for mil-sf and want a good story without the heavy time-investment of another epic saga of ten novels, then you can’t do much better than Ember Wars.  You can grab your own copies at IGG.