Happy Ides of March, everybody.  Watch your backs! 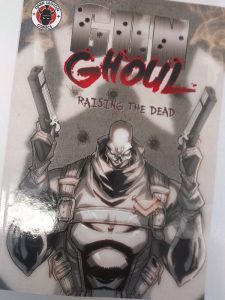 Back in December I took the Arkhaven Comics then new online book store for a test drive.  Wil Caligan’s Gun Ghoul showed up in plenty of time, but personal events made reading a comic centered on death and justice too painful.

Still, Wil’s a good guy who deserves support, so I cinched my belt tighter, sniffed and thumbed my nose like a good Mayberry Sherriff’s Deputy and shouldered my wife through a story of loss, revenge, and redemption.

I just can’t get enough of the Caligan art style.  In a way it reminds me of Warhammer 40k miniatures.  The proportions are off, but in a good way.  The figure work exhibits a willingness to bend and stretch in ways that…I think it’s what the Diversity and Comics guy calls “rubbery”…that strive more to communicate action than reality.  The style hovers on the boundary between lifelike and cartoony in a way that heightens the enjoyment.

It’s just fun to look at, is what I’m saying here people.  It makes for a stark contrast with the deliberately ugly art used in so many drawn mediums today. 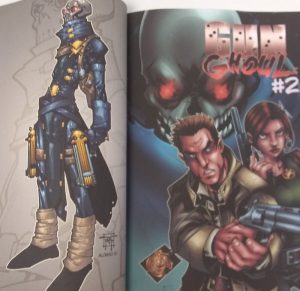 The story of Gun Ghoul is your basic ghost-gunfighter shooting all the bad guys tale.  It’s a comic apparently written for comic buffs as the opening vignette shows us the eponymous hero prior to his transformation as well as a number of his soon-to-be-nemeses.  It never actually spells out which is which, though.  If you aren’t comfortable with the standard comic book tropes you have to pay close attention to the art and the story both.  As a non-buff myself, I took the latter route, and can say that it’s nice not to be coddled to or treated like I was an idiot.  Comic books don’t need flashbacks, not when you can thumb back to th scene shown in the first two pages yourself. 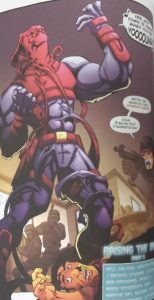 The story also follows two cops, one with a super-powered clairvoyant ability, as they track down the mysterious ghost-gunfighter slaughtering the criminal underworld one family at a time.  This adds a down to earth element, and allows for some real-time exposition in a way that isn’t forced.  We get scenes of Gun Ghoul’s villains hamming up the place before the big fights, including a bizarre one called the Red Hood.  His powers don’t fit into a neat little box.  He has a hood that operates similar to movie-Doctor Strange’s cloak and a cannibal/vampire touch.  Add a devil-may-care attitude reminiscent of Deadpool and you get a character that’s like a lot of things, but the creative blend turns him into an enemy that is ruthless, fearsome, and not at all likable.  Even ironically.

The first four issues are a fun read, though they can feel a little disjointed if you’re not paying attention.  You don’t want to skim this one as you’re drifting off to sleep.  It’s a title that asks more of its readers than most comics of its type.  Don’t let the fun art style fool you – it’s a darker and bloodier and more mature title than it appears on first glance.

Get your own copy here.

Get it direct from Arkhaven Comics.