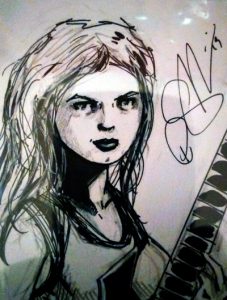 Peter Simeti over at Alterna Comics drew this slick little portrait of my daughter in five minutes for only a couple of bucks.  Great guy.

Me and my youngest have been reading through the The Actual Roger mini-series, and it’s a lot of fun.  The boy on the cover is the youngest super-hero, recruited by the deep state guys, he gets appointed to something of a fallen star superhero called Magnanimo.  Mags has been on the outs since his last sidekick met with a bad end, and the Actual Roger serves as his chance to make amends.  Shame it’s a chance he doesn’t really want. 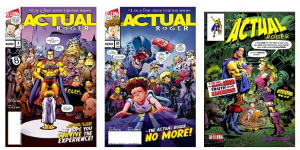 The story starts off a little slow, as it establishes Roger as a regular kid who chances into super-powers.  It scores big points from me for presenting a story with no political over- or undertones.  Roger comes from a stable family who doesn’t really

want him to go off superhero-ing, but recognizes they aren’t fit to raise him.  The first big bad we meet is a modern day feminist who hates Big Makeup, a literal blubber monster called the BeSHEmoth.  The government agent and CPS officer assigned to verify Roger is in good hands is…not the usual Mary Sue that teaches the Big Dang Hero a thing or two.

It’s a little too wordy for the six year old, so we skim.  It’s a little too frenetic at times, so we slow down to figure out exactly what’s happening in the panels.  A few more panels to slow down the pacing of the talk scenes really would have helped the story breathe.  As the story progresses it gets darker, too.  Learning what happened to Magnanimo’s first sidekick, and learning the nature of his super power, are presented with a heavy hand that might be a little too rough for the younger set.  We’re still waiting to see how the Issue #3 cliffhanger* resolves, but right now it doesn’t look good.

But it’s fun.  It’s light entertainment, and it’s exactly what I look for in a comic book to share with the little one.  The running gag behind the title of the series never gets old.  It also features one of the funnier panels I’ve come across in a while:

*No spoilers, but it’s a cliffhanger in spirit that’s the exact opposite of one in practice.