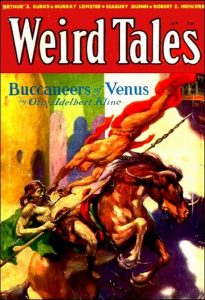 The other day somebody at one of the many renegade publishing internet water coolers asked if the works reviewed over at the Castalia House blog, of which I have done many, are worth reading.  While I can’t speak for all of the reviewers over there, my own reviews run toward the positive rather than the negative.  It’s a lot more fun to review works that get the blood pumping and that make you excited to share them with others, and the good stuff produced out there in the independent publishing world needs the attention far more than the weaker offerings.  My hope is that watering the productive flowers will allow a garden of delights to bloom, and ignoring the weeds will prevent them from propagating.  That strategy leads to a big downside in that it leaves little room left for the constructive criticism that can help aspiring authors improve their works.

As part of the on-going effort to challenge indy writers to do better, let’s take a look at two of the most popular guidelines: “Avoid passive voice,” and, “Show don’t tell.”  To do so, check out the masterful opening to The Scarlet Citadel, by the king of sword and sorcery, Robert E. Howard:

The roar of battle had died away; the shout of victory mingled with the cries of the dying. Like gay-hued leaves after an autumn storm, the fallen littered the plain; the sinking sun shimmered on burnished helmets, gilt-worked mail, silver breastplates, broken swords and the heavy regal folds of silken standards, overthrown in pools of curdling crimson. In silent heaps lay war-horses and their steel-clad riders, flowing manes and blowing plumes stained alike in the red tide. About them and among them, like the drift of a storm, were strewn slashed and trampled bodies in steel caps and leather jerkins—archers and pikemen.

It just doesn’t get any better than that.

So let’s tear this apart and see how Mr. Howard draws us in and guides us, one titillating piece of information at a time, through the image of a freshly slaughtered battlefield.  As writers, we have to carefully construct scenes one sentence at a time.  Howard doesn’t begin with a name or a character or even a sight.  He first lays claim to our sense of hearing by describing shouts of victors and wounded.  More than that, he describes what we don’t hear.  We just missed the roar of battle.  All that remains are the soils and the wounded.  That’s a tight first sentence.

Only after whetting our apatite does he move on to show us the carnage, the blood, and the broken bodies and swords.  He paints the scene in vivid reds and gleaming steel and sprinkles harsh descriptions of shattered vigor.  Take a look at the verbs he uses throughout – littered, overthrown, stained, strewn, slashed, trampled.  Say those words aloud.  They are harsh words, staccato with consonants, that harken to fell deeds and bad ends.

His use of contrast also sets our senses on edge.  Regal silks stained and crumpled amid the mud and blood.  Silent heaps of horses and riders speak of vital creatures laid low.  Bodies strewn about like leaves after a storm.  These are unpleasant images that set the stage for the drama yet to unfold.  We know that Conan is involved, and despite not knowing whether he stands with the victors or the vanquished, already we fear for the barbarian.

But also take a look at what Howard does not do.  For one thing, he avoids passive verbs.

Sidebar for a quick review – passive verbs are all words that express a passive state of mere existence.  The words ‘is’, ‘was’, and ‘were’ should be used sparingly.  They are typically followed by verbs ending with the ‘-ing’ suffix.

A few examples:  Men were shouting defiantly.  The wounded were moaning in agony.  Cloaks were being stained red by blood.  BORING!

The active versions of these basic sentences convey the same information in a far more dramatic and dynamic manner.  Men shouted their defiance.  The wounded moaned in agony.  Blood stained silken cloaks red.

We are linear creatures, and we crave movement in our stories.  We want conflict, and that demands desires that require action on the part of heroes and villains.  Even the inanimate objects that show up in a scene should have some purpose, some reason beyond mere existence.  They play a role in the story, so let them play rather than simple rest there, merely existing for the sake of existing.

In much the same way – and this represents one of my great writing sins – do not let your characters feel things.  They don’t feel the wind in their hair.  The wind throws their hair back from their face.  They don’t feel their guts turn to water.  Their guts turn to water.  Your readers are smart enough not to take that last one seriously.  They’ve all been there – they know what you mean, and they know that your narrator serves as a conduit for what the character feels.  You don’t need to explain over and over what the character feels, just relate his experience.  Anger blossomed in his heart.  A lone tear escaped from the prison of his lashes and plunged down his cheek.  A hot passion, long forgotten in the years since the death of her husband, stirred in her breast.

Make things happen, and your readers will love you.