After an all out brawl – or at least the sort of petty slap fight that passes for such on Twitter – the anti-SJW crews have retreated to their respective corners.  For those not in the know, we aficionados of the Pulp ethos look askance at the claims of the Hard Buds of Hard SF that Campbell’s addition by subtraction theory improved science-fiction.  As usual, the latest imbroglio kicked off with the claim that Fantasy is the one genre to rule them all, and that the Hard Sci-Fi circle fits squarely within it.  The Hard Buds took extreme exception to the notion. 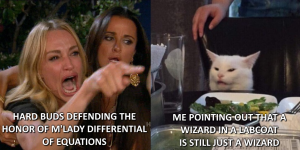 Don’t get me wrong, I enjoy a good practical tale of near-future speculation as much as the next guy.  It’s a fine niche of fantasy and one everyone should soak in from time to time.  For all his giftsas a story-teller, Campbell’s true strength – like Hugo Gernsback – was in marketing.  He sold the line that probable tech and engineering spec and the men who deal in both are smarter than the average bear, and technically smart science-fiction was a step up, and that you were a smart fella, you’d prefer the smart stories.  That’s a great line, and the crop of young men launching rockets at the heavens bought it hook, line, and sinker.

The problem is that Campbell poured all his point-buy into INT and used WIS as a dump stat.  (Ironically, in Dungeons and Dragons most high INT, low WIS characters wind up as wizards.)  The inherited wisdom of generations of western civilization’s best minds (read: Christian thinkers and scientists and philosophers) got chucked out the window in favor of a technocratic and ultimately secular view of the world.  And that played right into the hands of the Godless commies looking to stick their ugly camel noses into the sci-fi tent.  The natural result of the path that Campbell set the sci-fi world exploring can be readily seen in the words of a recent Hugo Award Winner who claimed “Joseph Campbell was a [expletive deleted] facist”.

They always eat their own

The other problem is that he tarred the Pulp Pareto 20-percent with the same brush as the Pulp Pareto 80-percent.  Granted, a lot of second-rate stories hit the newsstands during the pulp era – but the suggestion that the best of the pulp era should be defined by the average tale is as silly as judging the best of the Campbell era by the writings of Damon Knight.  It’s sleight of hand meant to hide the fact that the denigrator is standing on the shoulders of giants.  The useless bint who used her five minutes of fame to slagged Campbell was his natural heir hoisting him on his own petard.

One of the bigger problems with Hard SF is that it doesn’t really exist.  It’s a marketing term meant to sell stories to people who like Hard SF.  You may often hear the general rule that Hard SF stories are allowed one ultra-advanced technical advance, one piece of unexplained tech, and that the resultant tale explores the ramifications of that one box “indistinguishable from magic”.  Except that the Hard Buds all too often decide “I like Hard SF so any SF I like must be Hard.”  So you wind up with stories where dogs talk, anti-gravity exists, and anarcho-communism works pretty well classed as Hard SF despite possessing three rule-breakers.  The whole house of cards becomes a circle that defines itself by its own terms and changes the meanings of the terms used mid-sentence.

We semi-autists for whom consistency is the hobgoblin of understanding the world quail at such semantic legerdemain.

All of which may be true, but serves as a distraction from the tender meat of Hard Sci-Fi’s soft underbelly.  And that’s the Hard Buds’ refusal to exist in this world in which we live.  Remember that the casual definition of the not-quite-a-genre rests on allowing only the empirically provable elements of the real world to show up for the dance.  The world of Hard SF obeys the Secular Humanist diktat that forbids talk of that which can be touched, measured, or demonstrably proven in a laboratory.  Maybe you get one “Get Out of The Scientific Method Free” card, but you’d better play that card on technology – hard or soft, either way.  Everything revolves around the natural world and the natural laws.

Which leaves a pretty big fat gaping hole in the center of mankind’s existence.

Hard Sci-Fi springs from the cold, lifeless heart of a Secular Humanist worldview.  And while it can be valuable to prune away the supernatural – to isolate a single strain of the human experience to really evaluate how it works and how mankind reacts to that single strain in a vacuum – that style of story remains a simplification and abstraction of the rich tapestry of human existence.  It can be a nice break from reality.  It can make for some interesting thought experiments.  But it can never be a replacement, nor even an improvement over the majesty and fullness of God’s creation.

We tried following the Secular Humanist ways of the so-called Enlightenment, and all you have to do is turn on the TV to see how poorly that worked out.  The promises of Enlightenment scholars have proven to be fantasies as ephemeral and unobtainable as any utopia ever penned by the authors working within their small-minded shadows.

So let’s not make the same mistake with our fiction.  Let’s enjoy the fantasies of a purely rational world, but let’s not mistake them for what they are – as fantastic as semi-nude political women with a proclivity for getting captured by their enemies and rescued by Virginians amid the red sands of Barsoom.

Sidenote:  Please don’t link this essay to Twitter.  After a few parting outbursts from excited and emotional fans of the Hard Way of Sci-Fi, an uneasy truce seems to have been declared in that arena.  This post outlines in a thousand words what cannot be said in a 250-character tweet, and stands as a testament to my current thoughts on the matter.  It’s not an invitation to re-open the raw wounds of the latest fracas.  The Hard Buds may take a limited view of the universe, but when their passions are not roused to defend the sacred honor of their marketing label, they can serve as valuable Varangian auxiliaries to we Byzantine Men of Valor and God in the fight against the Death Eaters.  We’re outnumbered, and we need each other.  Be good to each other out there.