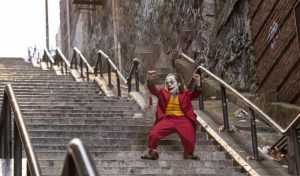 At least the memes are good

Yeah, I saw Joker. Didn’t use a gift certificate either, but that’s only because I mistook my “Rewards Card” for the gift cert I have and went to the wrong theater. Given how rare sneaking away from the kids is for a grown-up movie, there was no chance of bailing out at the ticket booth.

A good looking film with great cinematography. The story was really heavy handed, and not in a good way. Don’t get me wrong, I paid my money to be manipulated, but I expect a little subtlety in that manipulation. The director’s product spent a lot of time shouting, “NOW IS THE TIME WHERE YOU ARE SUPPOSED TO FEEL SAD” and “NOW YOU ARE SUPPOSED TO FEEL EMBARASSED”. Eh.

The Batman scenes felt shoe-horned in, and Kid Bruce was oddly brooding and intense. Which makes the death of his parents cause him not to become something new. It just makes Bruce’s transformation into a cosplay vigilante a case of him becoming more of what he was going to be anyway. It cheapens the drama of the moment.

Joaquin spends half the movie ACTING! Once again, the film wears its Oscar Bait like a sequin jacket that distracts from the goings on. As with most of the film, it really needed a lighter and less-is-more touch. It’s the Tom Cruise, THIS IS ME ACTING NOW school of acting that comes off as forced and awkward to watch.

One thing that did interest me was the inverted Hero Journey shown. Joker starts off low, rises to a high point, then just when you think everything is going to be okay, he digs deep and hits a wall that sends him down a quick spiral to outright villainy. Now THAT was interesting. That kind of nuanced story-structure was different from the ordinary and well worth observing because, like everything else it’s obvious even while you watch it.

On the whole, it was okay.