The Witcher Has Issues 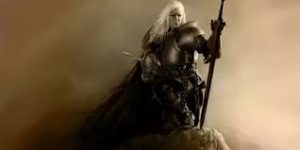 I know who this is. I’ve made my choice and stand by it.

Second things second – already cancelled my subscription over their recently announced “tee-hee, blasphemy” show, and now I’m just burning through the last few things that look remotely interesting before my clock runs out.

With all that out of the way, The Witcher starts off with a great demon battle teasers that it can’t deliver on.  To get the compliments out of the way first – Henry Cavill does yeoman’s work with the material he’s given, but he can only do so much – he isn’t superman, after all.   The sets are solid for the budget they have to work with.  Although the scale of the B-plot is grander than the producers have the budget to show, they do good work with what they have.  The evil army swarms and a city burns, and it is easy to overlook where the production values fall short.

On the other hand, this show is clearly not for me.

It is for cool wine aunts to cuddle up with their fluffy dog and enough booze to help them forget their loneliness for one more night.  We meet lots of strong and powerful Karen’s – queens and witches who look like the snotty librarians that you avoid when you run down to the local library.  They all jump through the usual “don’t need no man – I’m just as good as any man” hoops you’d expect, with a few slight variations.  The streetwise urchin just wants out of her Podunk town.  The Doomed Queen carries a deep sorrow in her heart as she know her kingdom is next on the Evil Army chopping block.  The fugitive princess slash banshee witch carries herself with a righteous and naïve haughtiness that works for the character.  But the big bad witch just comes across as too try-hard to take seriously.

But so many of the show’s visual choices are lamentably questionable.  The evil army dresses in ridiculous wrinkled cloth armor and clearly awkwardly tall coneheaded helmets.  Geralt walks around in full armor until the final showdown when he finally get to strut his skills… and then he’s in bare cloth.

The big breaking point for my suspension of disbelief occurred during the big battle scene where team good and team evil just line up and race at each other, horse and foot all mixed together as one.  Our Doomed Queen plays the role of Théoden at Pelennor Fields.  Unfortunately, instead of being surrounded by an honor guard and serving as the central pivot of the fight, she just wanders around the battle fighting on her own and dressed in armor that looks exactly like everyone else until her…king?  Consort?  Advisor?  Don’t know, don’t care, and you can’t expect me to because the writers clearly didn’t.  They fight in scrums until the Queen’s man shouts, “We’re losing!” to let us know that they are losing and with no regard for the morale of the few allied knights within earshot.

It’s the cinematic equivalent of making your action figures fight by slamming them against each other with all the drama and all the import.

Look, I get it.  Military tactics are hard, and the fight isn’t important – it’s the character moments, those little events in the battle that are important.  But you really don’t have to choose.  Fr a great example, check out how Vox Day’s Throne of Bones kicks off with a major battle that reveals character through the action. One prince is impetuous and proud.  One prince is reserved and obedient, but prone to doing the right thing even when it violates orders.  It’s natural, it’s organic, and it works within the context of a battle scene that progress with twists and turns all its own, and even breathes for a moment with a pace that allows the generals to explain what is happening and what might happen for the reader.

The Witcher is none of those things.

[Edit to add:  Just learned the entire writing staff is female.  That explains so much about this show.]