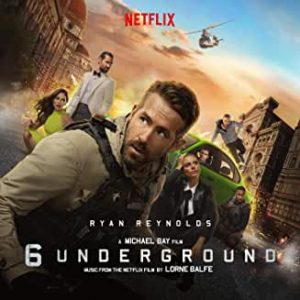 Michael Bay still has it.

Somebody finally gave Bay a lot of money and said, “you know what, screw it, just go crazy with this,” and go crazy he did.  It’s only on Netflix, and maybe they paid for this film – I can’t be bothered to look it up – but either way it feels like a blockbuster that just didn’t quite gel enough for Hollywood to dare a hundred million dollar ad campaign to prop up, so they cut their losses by sellling it cheap to Netflix.

His latest directorial effort, 6 Undergound, features a ragtag bunch of mercenaries who drop out of their lives, ghost away, to make the world a better place through nation building.

Turgistan has a dictator problem, and Ryan Reynolds figures that a non-CIA backed coup to replace the dictator with his democracy loving brother…hoo boy…is the way to go.  So he pulls together a discount A-Team to murder the Turgistan’s top four generals, seize Turgistan’s public television station, and capture the tyrant to inspire a color revolution that will…you know… lead to a lot less hospital bombings and chemical gas attacks.

Because that’s how these things work.

Eh.  As concepts for a mercenary team making a difference in the world goes, you could do worse.

If you’ve seen a Michael Bay movie, you know what to expect.  Plastic looking people, over the top stunts, frenetic action that never stops, weird jokes crammed into inappropriate moments, ‘splosions, lens flare, and camera work that looks like it was done by palsied trapeze artists.  It also has a lot of non-linear jump cuts with flashbacks inside flashbacks inside flashbacks, some of which work better to explain a character’s backstory than all the expositional dialog in the world.  Bay does has a knack for paying off his setups and setting up his payoffs, even if he does telegraph things for those watching from the IQ cheap-seats.  Give him credit, a lot of bigger-budget films lack that attention to story structure these days, and he does tend to turn a blind eye to most of the usual woke tropes that pollute films these days.

On the one hand, this isn’t a good movie.  On the other hand, it’s nice to see that there are still people out there trying to make this kind of movie.  The cast is drawn with the same bold strokes that Bay uses for everything, and the result is a mythic kind of tale that feels more like a cape-film than a caper film.  There’s something refreshing about a film that unapologetically paints western efforts to make the world a better place as genuine.  There’s something refreshing about a film that acknowledges that sometimes a few loose cannons can do a lot more good that any of the bureaucratic behemoths we call modern governments.  And there’s something refreshing about an ensemble cast filled with people who like each other – even if they drive each other crazy from time to time.

Apologies if this review reads like it is all over the place.  It probably is, but given the material at hand…it’s appropriate.