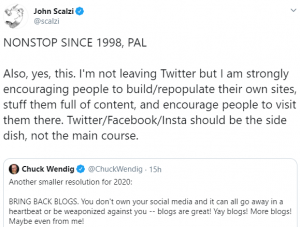 Before we get to the meat of this post, let’s take a moment to recall the first rule: 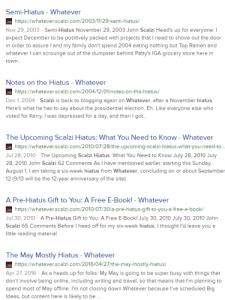 A quick search for “Scalzi whatever hiatus” takes six seconds and reveals five of the first six hits betray the lie of “nonstop”.

But whatever.  That’s cheap shottery, and we’re here to give credit where credit is due.  This is great advice, and the trend toward tweet threads has been a disappointing one.  I like the twit machine as much as the next guy, but it’s not a place for serious thinkers.

I’m actually curious about the sudden shift.  For years thee Wendigs and Scalzis of the internet have been enamored of the leftwing control over the big social media spaces.  The rallying cry of “make your own space” has echoed from the right since at least the 2016 election. They know something is up, and they know their current favored son status is at risk, so they are once again following the smarter and faster thinking dissidents.  You can expect them to leap in front of this parade with claims of starting the retreat soon enough.  That’s easy enough to see.  What’s harder is figuring out WHY they are shifting their strategy to follow that of we independent hordes.

What sea change are we looking at that would cause these guys to abandon their love for digital spaces run by amenable authorities?

Is it guys like Nick Fuentes dancing through the raindrops and laughing at the left’s inability to play their own game?

Is it the impending wave of Chinese competitors who care nothing for silencing crimethinkers, a likely bolthole for political dissidents from woke culture, entering US internet space?

Or does it have more to do with a barrage of lawsuits raining down on social media giants that threaten the SJW hegemony?

We’re talking about guys who are very online and very dialed into the culture of the SJWs.  They have contacts and ‘ins’ and rumor-mills at their disposal that we plucky underdogs do not.  So their change in attitude from as recently as a few months ago means something big is in the wind.

My guess is that all midlist writers are about to get the axe from DinoPub.  We’re going to see a flood of names with moderate sized followings enter the independent space and plant their flags.  They finally have no choice but to admit that their unstable orbit is pushing them toward the publishing event horizon that guys like Brian Neiemier have been pointing to for years now.  If I’m right, we’ll have a grand time watching them twist to spin their ejection from the Eloi down to the level of us Morlocks as an upgrade – particularly after years of sneering at us.

Stay nimble, gang.  The year 2020 is going to be a lot of fun for we mammalian successors to the DinoPub propaganda machines.

It’s the BernieBros. Backchannel discussions have pointed out to me that the Bernie supporters know that they backed the wrong candidate. As in 2016, Sanders will not be christened the candidate by the Democrat Party’s deep state powerbrokers. The cancel culture warriors aren’t sufficiently in the loop to know which candidate’s parade they should join right now. That puts them in a difficult bind. They could simply wait to learn the name of the right candidate with the rest of us, but that would entail doing something that the virtual signalers are constitutionally incapable of doing: shutting their mouths for a brief spell. That puts them in a tight spot. The year 2020 puts them looking at the sharp side of a two-sided bladed that they have been wielding for years now.

Fortunately, the Secret Kings have an easy way out. Do what the Dissident Right has been doing for years. Rebuild their own platforms, take credit for the move in that direction, and claim that being hoisted on their own petards is a sign they are doing something right. It’ll be interesting to see how they spin things to convince themselves that the Trust and Safety Councils at all of the major social media outfits have suddenly become infested with Nazis within the space of a few weeks. Who knows, they may suddenly remember that Big Corporations don’t actually make decisions with the interests of the hoi polloi in mind at all.]