I’ve been loathe to cross the streams of my blog and my twitter presence. Partly due to the very different approaches to conversation, and partly due to an aversion to pointless redundancy.  That should change moving forward, as twitter’s rapid-fire conversations often direct my thoughts down avenues best explored in the more sedate realm of the blogosphere.

Today’s post is hopefully the start of a decent trend for 2020.

The Pookinator fired some interest shots across the cultural bow when he pointed out that the Chick Tract on D&D is genuinely cursed because:

When pressed for more thoughts, he added the following: 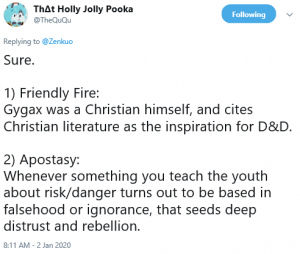 Which is an interesting and seldom cited pair of observations.  They don’t tell the whole story, though.  In fact, the whole story has never really been told in much the same way and for many of the same reasons that the whole story of so many historical events and cultures remain shrouded in deliberate mysteries, uncertain truths, and outright lies.  To whit – the people who write the histories have a vested interest in hiding the full scope of events.

In these early days of the collapse of the Pax Americana, direct evidence of the lies we are sold has taught us to question the things that “everybody knows”.  So let’s review what everyone knows about the early days of D&D.  Born of the tabletop wargaming culture, it was a simple tabletop game that appealed to the smart and disenfranchised.  Those who played it in the earliest days fell into two basic categories: the super smart set who eschewed sports and girls for escapism, and the Satanists who used it as a lure to entice the lost and forgotten latchkey kids of the 1980s into the dark world of the dark lord.

The Untouchable Pooka touches on how that latter classification mimics what we’ve seen in the “Recovered Memory” crowd.  As a brief review of that mess, the man who invented the concept of “Recovered Memories” claimed that abused children suppressed the trauma they experienced and, after therapy, full blown adults could reliably make accusations against abusers from decades previous.  Pretty convenient.  That theory has been contentious almost from the start, being so obviously a mechanism for false accusations.

But what if the man who popularized the repressed memory movement in the 1980s was essentially a cultural double-agent?  What if the point of popularizing a method of generating false accusations was meant to cast doubt on ALL accusations, even the most legitimate?  That’s a hell of a question to ask, but it’s one we should all consider now that the once seemingly impossible concept of a child-rape island frequented by former presidents, CEOs, and other luminaries is a well known fact.

Turning our attention back to D&D… is it really so far fetched to wonder if the people who popularized the Satanic Panic did so as a head fake.  The overblown reaction, which forced publisher TSR to scrub all real world references to real world demons from their second edition books, made any charges along those lines appear so ridiculous as to not even merit consideration.  It’s the perfect way to distract the public from those few poisoned souls who saw D&D as the perfect complement to the pedophile lifestyle that burbled along in the halls of sf/f conventions.

The playacting nature of D&D, combined with the inherent need to read up esoteric works, and the private basement/dining room physical spaces made it the perfect breeding ground for bad people to do bad things.  It was more than that, to be sure, but the idea that predators and demons weren’t drawn to D&D from the beginning is as naïve as the idea that predatory and demonic activities were a required part of the game.

We live in a dark and complex world, people.  It’s time to face up to the fact that Jack Chick – though not entirely right – was not entirely wrong.

And whatever you do, when you attend an sf/f convention, do not under any circumstances let your kids out of sight.