Lost the Plot in Space 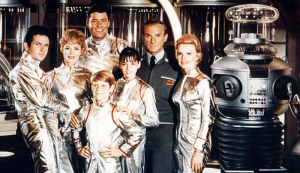 Season Two of the Netflix version of “Lost in Space” moves the bulk of the action from the confines of a small family survival drama into a much larger scope.  This time around it’s not just the Robinson’s, but all 600 members of Mission 24 that get involved.  After a bit of mucking around by themselves, the Robinson’s get back into space where they can participate in political intrigue on the decks of the badly damaged mothership that hauled the Jupiter 2 out where no man has gone before.

Having resolved their rocky re-started marriage, Mama and Papa Robinson show genuine affection for each other, and each brings something valuable to the team.  There is an impressive moment early on when Papa puts his foot down and tells Mama, “No,” and though she doesn’t like it, she accepts it.  That relationship beat has been absent from so many shows for so long, it stands out for its novelty if nothing else.  Of course, he reverses himself two minutes later, but it was nice while it lasted. 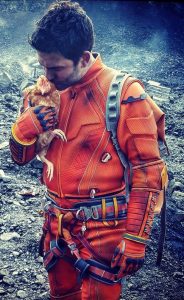 The best romance of the show doesn’t really count.

Once again, Don West and The Robot steal the show.  Once again, the show serves as an excellent example of the best we can expect from a converged Hollywood.  The sense of wonder is there for brief moments.  The adventure and action are there.  There’s even a touch of romance, although the dull and soft male half of that subplot earns his place as a suitable interest solely by dint of a lack of competition.  Much like my feelings for the show as a space opera adventure, Penny accepts the many flaws of her romantic interest more out of a lack of other options than because of any real positive features.

The show has a lot of flaws, but does a workmanlike job papering over them.  One example is the show’s tendency to pull a JJ Abrams.  It helps you forget how stupid a plot-point is by immediately following up a reversal or reveal with somebody running hell-bent for leather down a busy spaceship corridor…for reasons.  Unforetunately for me, I’m a writer incapable of watching a show without over-analyzing it.  So I see what they did every time they do it.

The best is example is Mama Robinson learning a valuable lesson about how her superior math skills cannot overcome the reliability of men to do the dramatically necessary thing instead of the smart thing.  Mama defies Captain Ethnically Ambiguous and all her warnings about how her plan is too dangers.  Mama then learns her lesson, that she should listen to the Captain’s judgement.  Then, not five minutes later, she sets out to save Don West despite the Captain’s warning that it is once again too dangerous.

It’s fine, actually.  That kind of ‘reset every episode’ and ‘no character growth ever’ worked just fine in the 1960s, and it works just fine in the 20teens.  Doctor Smith gets the same single-episode character arcs that reset periodically.  So does Perfect Judy.  And Will the Robot Whisperer.  The only people that get to experience a permanent character change are those who perform a heel-face turn moments before their death.

The season ending cliffhanger ends on a dud.  They make a big whoopty-do about one of the least interesting characters, and the sort of mystery that they’ve just spent two full seasons beating you over the head about how the answer doesn’t matter.  Until suddenly it does?  We just saw a literal alien invasion and a massive change in the logistics of being lost in space, and the potential answer to a mystery we didn’t even know existed is supposed to top that?  Does not compute.

The unreadable face of The Robot saves the day with his implacable strength and mysteriously laconic mannerisms. The same applies for The Evil Robot who literally dropped out of the skies in last season’s finale, and the damaged robot sidekick, nicknamed Scarecrow by the crew. The interplay between those three ‘bots, the inherent uncertainty of what they are, what they want, and what they might do, makes it worth wading through all the overwrought drama and the admittedly more subtle gyno-centric writing of the human portion of the show.

The show also spends a little more time reveling in the Space Opera, with multiple alien planets and atmospheres encountered. We get a sort of space battle – more like an emergency space repair, actually – and plenty of soaring astrophysical visuals.

The generally standard BS tax – the amount of nonsense that one must accept in the stilted finger-painted human characters – is generally lower and better hidden than most of Hollywood’s offerings these days. The action and adventure and exploration are all top notch, and the robo-stories and mystery boxes keep me coming back for just one more episode.

On balance, the Second Season gets a rating of Three JJ Abrams.  Don’t take it as seriously as the showrunners do, switch off your brain, and buckle in for some light-hearted adventure that won’t tax you.