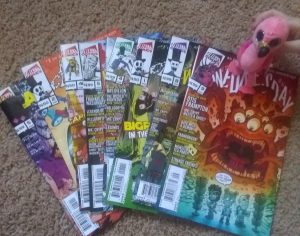 Alterna Comics continues to demonstrate why smaller publishers are the future of comics.  The big boys are just too old, too slow, and too set in their ways to compete with the likes of Alterna, Arkhaven, and that thing Jon Del Arroz is doing where he just pumps out solid titles month in and month out without a publisher.

The It came on a Wednesday line is all anthologies all the time.  It’s a sample platter meant to entice you to dive into the full range of Alterna’s other titles.  I get them mostly for the one or two page Mr. Crypt and Baron Rat tales, which my daughter loves.  They have sold me on Log, the tale of a barbarian treant with a great big honking axe that fights demons.  It looks like a one trick gimmick, but based on what I’ve seen in ICOOAW, it’s deeper and a lot more interesting than that.  It’ll get added to my next pull list.

The Actual Roger came to a close with a bang.  At five issues, and one of those a double issue to boot, it had plenty of room for multiple storylines, several heel-face turns, and recurring villains.  The Big Bad proved to be a joke few people younger than the older Gen-Xers would have the culturally knowledge to understand.  Like the old Looney Tunes, they don’t have to.  It’s an ugly scrawny guy with a building sized sonic cannon who wants to crush the city – that’s all they need to know to follow the action.

My own daughter lost interest, but I thought it was a fun and breezy read.  As mentioned, she prefers the wacky hijinks of Mr. Crypt and Baron Rat, which we also picked up.  They are perfect for those just learning to read.  Alterna nails the Saturday Morning Cartoon feel and even manages a sympathetic and complex character in Mr. Crypt – a monster who just wants to be loved – without getting all preachy about it.