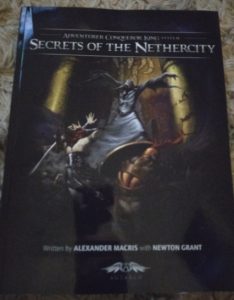 It’s time to break the seals and talks bout why you should run your D&D crew through Autarch’s Nethercity.  But first we need to tuck all the sensitive and classified data behind the fold.

Don’t click next unless you want to have the Secrets revealed through antiseptic blogging rather than rich play at the table. 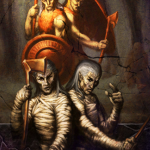 That’s the root of the major factional okay of the Nethercity.  There is a second faction of humanoids that might serve as allies for the PCs, but they are a wild card, just one more variable thrown into the mix.

At it’s heart, the Nethercity is a tomb buried beneath the city’s cesspit – and that thoroughly ignominious entry should serve to humble the heroes who go graverobbing in the Nethercity.  At least until they find a better and more convenient entrance.  Having been buried long ago, the place has waited in stasis, disturbed only recently by a tribe of monsters who know better than to go breaking seals and waking the dead.

At least until the PCs arrive.  As they explore, they will break seals and wake the dead, and that means uncorking a lot of bottles that might not want to be recorked. 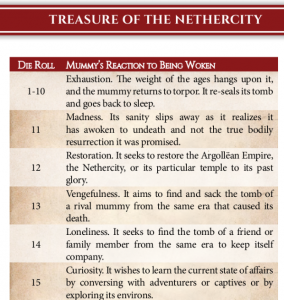 Scattered throughout the labyrinth are numerous mummy tombs, and each one has its own motives.  Before play, or perhaps during, the DM rolls on a table, shown in partial here.  Any mummy that doesn’t get ganked might just linger and pursue his or her own interests. As a result, it is impossible to know how the place will run in play.

It also creates a slow accretion of complexity for DMs.  He can add one faction at a time, and let the place breathe and grow of it’s own accord.  That’s a huge time and effort saver.  In a similar manner, the set dressings also provide a steady trickle of clues as to the nature of the tomb.  While a dedictated DM can cross reference all of the carvings and statues and frescoes, more efficient DMs can just reveal them as they are encountered and follow along as the PCs put it all together.

It smacks of the classic  Ravenloft module, with its random motivations for Strahd, and it works great at the table.