Given the amount of pozzed material on the shelves at the local comic shop, if there’s no Alterna available, my tastes run toward the longboxes of old anthology comics.  Burned out on the sordid and pointlessly seamy offerings of ‘Eerie’ and ‘Creepy’ and too short on cash to grab the ever-reliable ‘Conan’ titles, I took a risk on ‘Galaxia’, a steal at only two bucks. 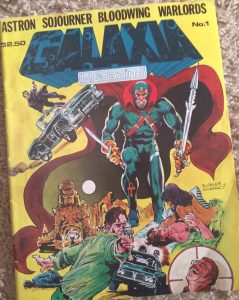 That cover promises a lot of great stuff, and the contents deliver on all of them.  That’s the cover to an anthology comic – five stories that range from planetary romance to space opera to mil-sf, with a dash of 70s era gangster wars blended with straight-up cape and flight superhero action.

They are all intriguing, but alas, as near as I can figure only the one issue made it to print*.  Probably why the asking price was a mere two dollars.  With only the first chapters of five stories that promised to weave together before the end, this issue is merely a tease – a glimpse of something that might have been really special had it only blossomed in our current golden age of “Screw the Powers That Be, I’m Publishing Whatever I Want”.

It’s hard to judge the quality of the tales.  They felt a bit rushed and incomplete – no duh, they are all chapter one of a longer work, and they feel like it.  This is an introductory issue after all.  The art was well done, the writing ranged from fine to fun, and it left me wanting more.  Also, there is this in the editors page.

All that said, there is a strange twist to this story. 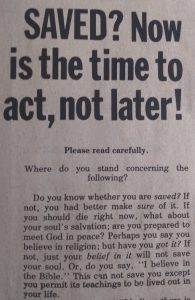 Everything old is new again.

Late last year a slew of explicitly muscular Christian works hit the market, a spontaneous trend that Razorfist christened ‘Crucifiction’. Alexander Hellene has the full story here. And that is relevant because if you look close, all of the stories in ‘Galaxia’ read like proto-crucifiction.  Here, the editors lay it out in black and white: 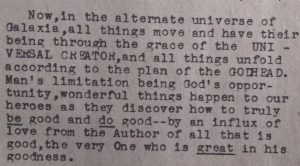 Like all the best D&D campaigns, and as the master of fantasy himself (Tolkien it should go without saying), these stories are not the explicit “Captain Cross” style of tales.  They don’t read like the cringe-inducing efforts to make bible stories Hip and With-It.  They are subtle – for the most part – and the Christian influence is a foundation of the work.  Like any strong house, you don’t really notice that foundation unless you really look for it.  And you would surely notice it if the foundation wasn’t there. Like the name Gideon Cross.  Or the sigil on a flag in the background of a battle featuring a rose over a cross.  Or a dozen other sly means of tapping into Christian culture without making that the centerpiece of the story.

All of these stories were written from a base of assumptions that the West used to take for granted.  They unabashedly revel in Western Civilization in the same way that Stan Lee’s stories of ‘misunderstood genius outsiders hunted by a fearful and ignorant society that just doesn’t understand how awesome they really are’ revel in the assumptions of his own civilization.

Are they better than Stan Lee’s works?  I don’t know.  But they are different.  And they are different in a way that I really like.  And want to see more of in my own civilization.  I see it in the independent works of creatives like Alexander Hellene and Jon Del Arroz and Adam Lane Smith.  And you can probably see it in my own works as well.

*As mentioned before, I’m not a huge comic book fan, so my research consists of a bit of rudimentary web searches and sending this comic to a better read friend.  If you have any insider knowledge on this title, feel free to set the record straight in the comments.