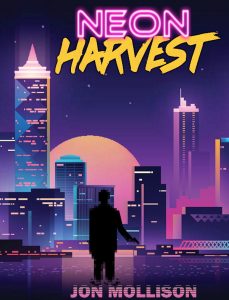 Newsletter subscribers saw this a while ago. Now it’s the rest your turn to take a gander at the cover for my next novel.

What if the nineties lasted forever?

One man’s search for meaning in the high-contrast heart of a day-glo city goes awry when his client’s wife is up to something a lot more serious than a little side action.  Jaded, bereft of hope, he teeters on the brink of despair when an old friend makes him an offer that proves too good to be true.  The biggest financial deal of the city is about to go down, and the key to the whole thing – a dream girl as ‘too good to be true’ as the job itself – needs a man who can save her from a life worse than death.

This technoir thriller takes place in a retrofuture that feels as familiar as the world outside your door – for better or worse.  So strap in, follow along as the mystery unravels, and get ready for a strange sense of nostalgia for a future that never was…in “Neon Harvest”.

The work is now available for pre-order, and it should go live for digital and hard copy readers in one week – that’s on February 29th.

Because when you have a chance for that kind of anniversary, you have to take it.