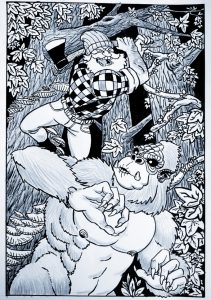 Now this is what I like to see in a D&D product.

Lumberlands: Rise of the LeafLords!

Not really.  But take a look at the maple-swilling description of this light-hearted product:

When you need a break from tromping through ruined castles and braining hobgoblins,  come spend some time in the misty Lumberlands, a vast expanse of enchanted forest where brawny lumberjacks ply their trade, seek adventureand fortune, and defend the frontier from horrible sasquatches.

It’s a mini-setting, complete with three rival factions, the titular lumberjacks, the Squatches, and…Squirrels?  Yep – they live in treetop cities.  This project wears its heart on its flannel sleeve and might look ludicrous to the casual gamer, but we grognards remember Dungeonland.  We were there, maaan!  Four inches tall and attacked by badgers and rabbits and terrible, terrible whimsical creatures – the whimsy only made our inevitable losses all the more painful. 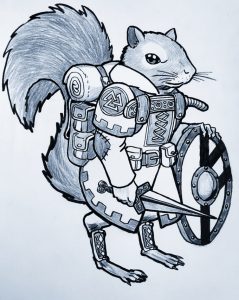 It isn’t an adventure.  It’s a module, which the #ChosenFew know is the superior form of adventure supplement.  You can plug it where you need it, anyplace with some mountains and forests will work.  Line up the factions and turn the players loose in the sandbox.  They’ll build and knock down castles you can’t even imagine.

The combination of Americana and tall-tale whimsy makes for a nice break from the usual northern-European style of fantasy, and the creatives behind it understand the value of addition by subtraction.  The setting has no native elves, ents, fairies, or other Celto-Germanic faffery, allowing the Wampus Country setting to take on a unique charm unlike that of most supplements on offer today.

Go back it.  At five bucks for the PDF, how can you resist?