A number of calls for this flitted through the haze of social media earlier this week.  Most of them coming from exactly the sort of people who love to burnish their “one of the good ones” bona fides by demanding other people make an effort to make the world a better place.  On its surface this looks like a great idea.  The olds are vulnerable to illness, so why not give them the first hour of the day to shop without fear of the youngs infecting them with the big C-chan.  Reduce their exposure, flatten the curve, and all that.

On the one hand, if this isn’t paired with steep rationing at the checkout stand, I can see some unsavory types using this policy as a means to jump the line.  Send mee-maw in at eight o’clock to clear the shelves of battled water and any paper product softer than the newspaper front page.  Hire gramps out on a per-trip basis: “This old man can guarantee you two extra large bottles of hand sanitizer and he only charges forty bucks for each trip through the store.”  Maybe we’ll get a few Boomer fights and World Star: The Nonagenarianizing videos out of the deal.  Seems like this policy alone would be rife with avenues of exploitation, but maybe that’s just the wargamer in me looking for all the angles and second-order affects.  We can’t let second-order effects get in the way of a feel-good policy.

So forget all that stuff, let us think about this a little deeper about the first-order effects.  We all know that one of the scariest things about this slow burn apocalypse is that the gene code responsible lingers in the infected body for two whole weeks before ravaging the host with symptoms.  Two weeks between infection and symptoms means that anyone could have already had their cells hijacked and be spreading the nasty piece of work around right now! 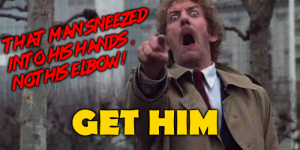 And that doesn’t discriminate based on age.  All you’ve done is sequester the Boomers into a small space where they can rub elbows and share the virus amongst each other for an hour every day.  All you’ve done is create a safe space for transmission from senior to senior.

Which is why I think this is an op generated by the kinds of people who call this dance with the fourth horseman the Boomer Remover.  Like so many other policies, it looks like compassion, and the sub-115 IQ crowd will never notice the actual effect doesn’t match up with what the policy was supposed to do.  Better yet, it is a suggestion tailor made to tickle the virtue signaling bone of those who pat themselves on the back for tweeting at Target that they should do something.  It’s the “managed health care will reduce costs” of flattening the curve.  Just float the idea, and let the dimwits lead the charge for daily cough-a-thons for the Only Generation That Ever Really Mattered.

To be fair, maybe I’m the idiot for revealing the magic behind the curtain, but unlike most of my generational cohort, I kind of like the Boomers.  Yeah, they are pretty smug and self-absorbed, but so were their parents.  The Boomers might have been derelict in their duty to turn around the destructive policies of their forebears, but as an X-er myself, I’ve got too many glass walls in my house to go lobbing stones around willy-nilly.

Jon Mollison was weaned at the literary knee of Tolkein, Howard, Moore, and Burroughs. He spent decades wandering in the wilderness of modern genre fiction, wondering when the magic and wonder went out of the world of dragons and space ships. In his darkest hour, he encountered a wise man who handed him the open secrets to crafting works that emulate the stories of the great authors who built the genre. They are easily summarized in but two words: Regress Harder. Now one of the twelve champions of the Pulp Revolution, his self-published works represent a more direct lineage to the tales of action, mystery, romance, virtue, and pure unalloyed adventure than the bland imitations churned out by New York City publishing houses in recent decades.
View all posts by Jon Mollison →
This entry was posted in cultural analysis. Bookmark the permalink.