Jon Del Arroz has a knack for tickling my adventure bone. His latest successful KickStarted comic, Dynamite Thor, hit my inbox over the weekend, and made for a glad respite from the pressure of being half-an-ocean and full continent away from my ladies.

For those unfamiliar with the property, Dynamite Thor is a public domain character from way back in the earliest days of the comic book industry.  He cannot be harmed by explosives, so his solution to every problem involves dynamite.  When that doesn’t work he shifts to Plan B – more dynamite.  He is a fun character, and Jon updates the story to our modern era, replacing the ubiquitous Nazis of yore with the seldom seen Middle-Eastern terrorists of today.

Couldn’t get around to a review until now because of the pressures of a complicated dayjob project (now on hiatus) and shouldering the go-no-go decision followed by a race against sealed borders.

That’s over now, so I can report on my findings.

The writing snaps writing along, with larger than life characters presented in broad and efficient strokes.  The mostly self-contained stories in the copy given to me eschew long and convoluted relationship drama with hints of backstory slowly delivered over time.  Jon wastes no ink getting right into the action or moving things along.  Here’s our characters, here’s our dilemma, aaaand GO!

It’s a nice change of pace, this reversion to and older, efficient, and yet far more dense style of story-telling.  Even if you find the Big Bad of issue one a bit hokey, and the solution to its defeat a little over-used, they do exactly what they need to do in order to drive the plot and get the reader into the larger world. 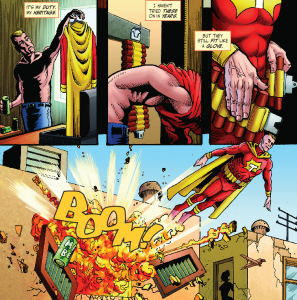 Not a huge fan of the art. It does what it needs to do without being obtrusive, but doesn’t elevate the writing. It hits the level of detail/vagueness just right for comics, with neither too much detail nor too little. The characters are all well defined and unique, and the action easily understood. The colors are great? I’m not an art guy, so can’t get into too much depth on this.  The two issues do show a couple of flashes of brilliance – I really liked this sequence, for example, with its casual disregard for collateral damage.

What Jon has done here is turn take the attitude of many indy comic creators (“we have to go back to the nineties”) and turn that up to eleven (“we have to go ALL the way back!”).  And it works.  Thanks to an appreciation for pacing and characterization, and a devil-may-care attitude towards both PC and alt-right culture, Jon delivers a worthy successor to the unabashed fun of the Golden Age era of comics.