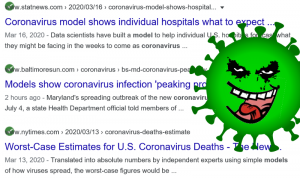 Don’t talk to me about models.

When the world doesn’t quite work the way you want it to work, you can always rely on the models to tell you what you wanted to hear.

The thing about mathematical models is that they are tools.  Not sacred writ, and not fool-proof methods of communing with the underlying laws of nature.  Their use is limited to certain very specific goals, and limited by the skill of the person wielding them.  The best one are so vastly complicated, with dozens of inputs and throughputs and outputs, all of which must be carefully calibrated and checked and refined over multiple iterations, that they are virtually impossible to verify for anyone who isn’t getting paid to do so. 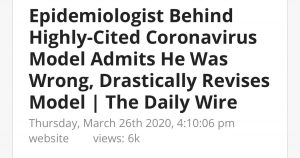 Which means that it is vitally important that modelers who want to use their models to win friends and influence people to lead the charge for limiting their application to those narrowly defined areas where they can be of some use.  When they do, then the amount of trust that the unskilled can place in mathematical modals, and trust in the models’ predictive powers can grow over time.  This trust is a fragile thing, easily destroyed.  A wise mathematician would loudly police those who do calibrate models based on political and financial considerations rather than purely mathematical ones.

The wise mathematicians, being learned in the ways of probability, would recognize the possibility of the occurrence of an outlier, a clear and present danger that necessitates the need for trusted sources of information and a public faith in predictive models.  Say, a world-wide plague, just to pick one at not-so-random.  In that event, those who spent decades calling upon the deuses in the machinas with careful reserve rather than reckless abandon would be positioned to serve as reliable guides in the here and now.

The cunning and the selfish, climate modelers, would ignore the possibility of an outlier event and squander the hard-won faith in science built by the Enlightenment scholars.  They would grab the short term gain by using models as a bludgeon – one predicated on far-flung predictions of unprovable harm decades in the future – to win enemies and influence the credulous.

And that’s the world we live in today.

It would be nice to have reliable models.  Models we could trust.  But given that models have only proven as reliable as the media who report on them, we don’t live in that world.

Which means that any think-piece explaining how many lives were saved by self-quarantining early vs. late, or by locking down borders vs. leaving them open, has as much credibility as a street-corner witch-doctor looking at the livers of freshly slaughtered chickens.  Both might be right, but don’t bet your life – or that of your nation’s economy – on them.  Instead, look to the immediate past, and the present for nations that were first in line for a visit from the Batsoup Avenger.  Your own sense of conventional wisdom, survival instinct, and intestinal intuition will serve you better in this crisis.

And for God’s sake, wash your damn hands.