All this extra time on my hands freed up by the lack of a commute bought me a chance to play a round of this solo wargame by Command Decision Games.

It’s a card-driven event game combined with a hidden objective search that plays mighty smooth.  There aren’t a lot of fiddly bits to trip up a wargamer slowed only by his own pace.  When there are too many things to track, too many sub-phases per turn, I tend to rush through them and forget important details. 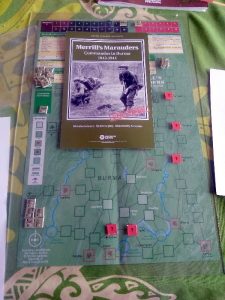 You start the game by drawing a mission card which details your troop budget, the number of objective markers to place, and the total KIA you want to inflict on the enemy as you move about the point-to-point map.  Most importantly, it tells you how many turns you have to accomplish your goal – which amounts to finding a few objectives and returning them to base.

At the outset it looks like there’s no way to accomplish your missions in the time allotted.  Even with the lucky placement that I rolled for my objectives (the red chits above), there wouldn’t be enough time in the day to search all five points and get two back home for the win.  This fear proved groundless, as many of the event cards offer a chance to earn more ‘turns’ before time runs out.  Not enough to let you dilly-dally, but enough to get you over the finish line. 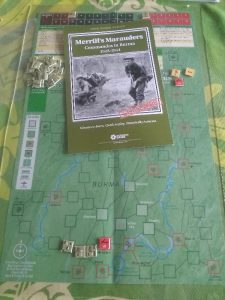 ach turn, you move one of your force stacks and flip a card.  Half the time this means combat, which is short, sharp, and savage – in my play through I barely managed to score a +3 KIA against my own chits dying.  Half the time you’ll get a special that offers a chance at recon (free chit flip) or supply (more turns) or some other obstacle.

I lost, with poor old Merrill dying within sight of base.  There were just too many high-firepower Japanese lurking in the jungles this time through.  It didn’t help that my load-out was heavy on the specials and light on the actual firepower.  Given more playthroughs, and a more careful force selection, it should be possible to win this game at least one time in three.

Clocking at 45 minutes for my first play, it’s definitely on the lighter side of things, but when you’re hammered by work and sidejobs and family, it’s enough to get your brain moving and satisfy that wargaming itch.  At less than fifteen bucks delivered, it’s a good value for the money, too.  Fun, engaging, and challenging – just what the quarantine ordered.