If you’ve got an Amazon Prime account and you are into long, slow, and thoughtful sci-fi pieces, you’re going to want to check out Tales From the Loop.

As the title indicates, this is an anthology show with each episode a (mostly) self-contained story.  Set in a small Ohio town whose core industry is gonzo science developed in a huge subterranean lab, each episode follows members of the town as they interact with various bits of Looptech.  Large expressions of the massive and bizarre technology litter the landscape, like giant billboards reminding the viewer that the town, like the show itself, is built on a massive foundation of mysterious tech.  The parenthetical ‘mostly’ in the first sentence of this paragraph is there because the townsfolk encountered in one episode appear in other episodes, creating a linked set of stories that build and progress as the season progresses.

Shot with a dreamy steadiness, filmed in muted colors, and underlain by a minimalist soundtrack, the show is patient and reserved in a time of splashy lights and big booming explosions.  As Plinkett says, sci-fi should be loud and dumb or slow and smart, and this is definitely the latter.  It almost goes too far down that road to land inside the realm of pretentious, but the lack of clear messaging in the episodes I’ve seen (three so far) go a ways towards inoculating it against that charge. 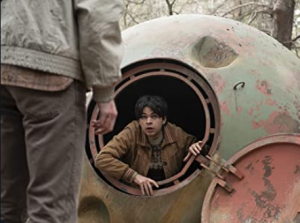 Shot with a slow and deliberate pace, Tales From The Loop is a thinking man’s sci-fi show.  The individual episodes aren’t particularly original, nor are the philosophical questions it raises particularly groundbreaking.  However, understanding what is going requires a lot more focus from the viewer than most of today’s offerings.  This is not a show that holds the viewers’ hands.  Viewers willing to pay attention to things will find the most obvious odd details, made obvious by the camera lingering a moment too long, will pay off later.  The first episode is rife with moments that leave the viewer wondering, what the heck that was all about, a question that may not be answered until later in the episode or even several episodes later.

It’s hard to talk about any of the plots of individual episodes without ruining things.  At heart, this is a mystery show, and each episode opens up with a slow burn setting of the pieces and characters.  They take their time establishing “the lonely girl” or “the virgin and the chad” or “the selfish girl”, and steadily progresses through each character arc, with the final moment of each episode providing a much needed resolution.

Put this one on at the end of the day, when you’re ready to wind down, but are ready for one last piece of artwork to engage your brain.  It’s the kind of smart sci-fi that has proven so elusive over the last few years.

[Cautionary edit:  After a few more episodes worth of viewing, this show is extraordinarily uneven.  More analysis once I’ve finished the first season.  For now, I’m walking back my recommendation from STRONG to GENERALLY.]