Smart sci-fi, genuinely thoughtful sci-fi on the order of a Solaris or a Primer, is a rare thing these days.  Hollywood much prefers to devolve a thoughtful sci-fi property into two men punching each other atop and exploding high place (see Star Trek) or to use slow-mo shots, soft focus lenses, and gentle ambient music to lend a patina of thoughtfulness to clever-clever, flicks with ‘gotchya’ twist endings (Arrival).

Tales from the Loop, for the most part, avoids both pitfalls.  When it focuses on the central theme of the intersection of love and change, it’s great.  When it takes its eyes off that ball, it fumbles.

The show centers of a family whose patriarch is the head of a magic research lab with a long record of losing track of highly dangerous and unstable technology.  As a result of his mismanagement, his daughter meets her grown-up self through the help of a son who befriends her as child, mother, and septuagenarian, and whose brother gets brain-swapped with another boy before ending up the body of a robot that dies protecting him from another robot that attacks for no discernible reason other than giant-robot fights are cool and this poor kid hasn’t lived through enough weird deaths in the family.  Also, for no reason the boy’s teacher is a robot.

On the one hand, the show is brave in that it offers no answers.  It offers the questions up, plays with them a while, then puts them back down.  It’s an effective means of provoking thought in the viewer – and the fact that this is my third post on this show demonstrates that it worked on me!  It doesn’t end with a grand message or wrap things up with a neat little bow.  The ending is messy and open and aside from landing on the idea that it is possible to love changing things in a changing world, it doesn’t offer any concrete answers.

On the other hand, the show is cowardly in that it offers no answers.  It’s a warm and drifting show that doesn’t have the guts to take a stand.  However you feel about the subjects raised is just, like, your opinion, man.

Which leaves me deeply conflicted.  It’s an interesting premise and an interesting concept, with grand ideas presented in thrilling slow-motion*.  On the other hand, it doesn’t really deliver the goods.  The aftermath of a boy meeting his mother when she was his age, then a month later time-skipping thirty years ahead in her life, gets a passing nod.

Woah, hold on there, writer.  That’s a hell of a premise for a full season.  Rather than deal with it, they just glance off the concept and forge ahead to get to the real concept that you can love a thing even as it changes.

And… maybe it’s just me, but that’s a concept that I take as a given.  Change happens.  And it’s okay.  Alert the media.

That might be an interesting concept for a post-wall woman, forced to grapple with her fading beauty and the raft of terrible decisions that led her into land of the lonely wine-aunts.  That might be an interesting concept for an industry dedicated to capturing frozen moments in time, beloved in part because they don’t change.  That might be the sort of ‘taken as given’ concepts that needs to be pulled apart and looked at from fresh angles.

We have a lot of reasons to believe in it.  We have evidence.  Eyewitness testimony.  The words of experts and instructions from the maker of the universe himself. 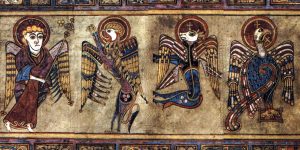 It’s a case of getting yourself into trouble by ignoring the instruction manual.  These pieces of the universe don’t fit together the way you want them to, and rather than refer to the instruction manual, the smarty-farty types spend endless hours crafting shows like Tales from the Loop in a desperate bid to duct tape unworkable parts together.

That makes for some surface-smart watching that leaves those of us who try to follow the instruction manual scratching our heads due to the lack of deeply profound wisdom.

*Not going to lie, I repeatedly hit the “skip 10 seconds” button on my remote during the last four episodes and didn’t miss a beat.