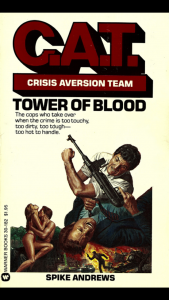 This 1982 mens adventure fiction novel was recommended to me by fellow Heroes Unleashed author, JD Cowan, who reports:

…our pair of hero cops chase down a mad drug-dealer through dirty back alleys, disgusting sewers, an exploding chemical plant, and the twin towers (oh boy), while being chewed out by their boss and while one is trying to spend time with his family and the other is trying to pick up chicks. Our pair of heroes, Weston and Santillo, rib each other along the way, and turn criminal scum into Swiss cheese while they hunt down a sadistic prick and his cadre of mercenary scumbags.

Read the whole report over at the Tower of Adventure, including a much more detailed background to the genesis of this project, which was birthed just a little too early for its own good.

Unlike me, JD rather enjoyed the experience.

Where he found Tower of Blood a light-hearted romp, I found it light and unfulfilling.  To be fair, a lot of my complaints revolve around the cliched presentation and characters, clichés that have only earned their place in the thirty-eight years since this novel was first published.  We’ve seen the tantrum throwing police captain before.  We’ve seen the mismatched partners who are friends despite their differences and don’t let their friendship get in the way of constant bickering.  It probably isn’t fair to criticize this book for the ubiquitous use of those tropes in the interim, and judged on its own merits, it definitely isn’t fair.

But I’m not judging this book on anything other than how well it did its primary job – entertaining me.  In that, it worked only as a brief window into the world of the early 1980s, when disco hadn’t quite breathed its last, Miranda rights were sketchy, and America was just waking up to the new dawn of prosperity.  It’s a fast read, concerned more with action and plot than internal monologues or frowny-faced political commentary.  It does its job well, reading like the official tie-in novel to one of the standard template 1980s buddy cop movies.

But I’ve been down this road too many times to enjoy the scenery.

I’m ready for new twists on the old ideas.

Maybe you do.  It’s only a buck, and you can get a copy on Amazon.

Good luck, and I hope you get more out of it than I did.